This morning Kathleen said to me, “Do you realize that you’re always saying, ‘I wonder when I’m going to be able to do this or do that with Noelle.’ Just a few days ago you were saying you couldn’t wait until you could scratch her on the neck. Seriously, just a few days! And here you are scratching her neck, her chest, her leg, her ear, her face and are you satisfied, even just a little bit? Have you taken a moment to just sigh happily and say gee this is only Day 47 and look how well we’re doing?”

“I don’t believe it. You only thought I wonder when I’ll be able to do it all on her left side… or when will I be brushing her tail and trimming her feet for goodness sake.”

“Gotta think ahead,” says I.

Fortunately, she said it with a smile. But she does have a point. As I finally stepped up to the task of writing this newsletter I actually had to go back and read some of the earlier newsletters just to see where we were when, and I was amazed. Only nine days ago I couldn’t even touch her on her jaw. She’s leaping thresholds like an Olympic champion. 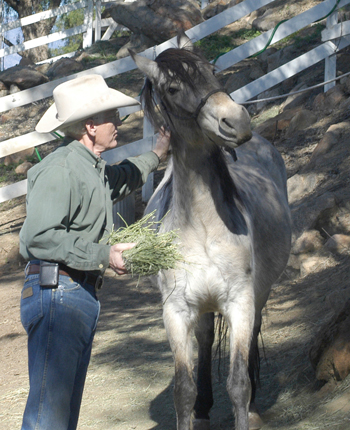 And the fascinating part to me is still how completely independently wired everything in her brain is working. I can do all of the above that Kathleen mentioned… with my left hand when I’m on her right side. But if I so much as lift my right hand to touch her she pulls away. Never mind getting over to her left side. All the trainers and clinicians tell you that whatever you do (training, desensitization, etc) on one side you must also do on the other because horses have monocular vision with each eye when only one eye is on the subject. And they have virtually two separate brains, each getting the feed from each eye. But even so, with horses who have lived their entire lives in domestic care, at least for us, it’s never really been like starting from scratch when you move from one side to the other. With Noelle it is. And I’ve come to believe that the reason is that she has spent five and a half of her six years in the wild having to constantly be on the lookout for predators and is truly hard-wired to accept no information, on either side, as safe until proven to be so. Consequently, me on one side is totally different than me on the other… until proven to be the same. But that’s how we are able to know and love horses today. Because as a prey animal, a flight animal, with no defense against predators except to run, they probably would’ve never made it to the twenty-first century if they weren’t wired the way they are. 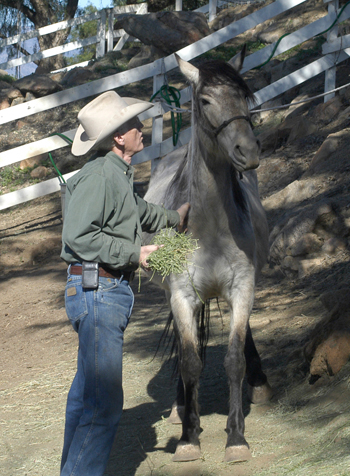 Our guys and gals who have spent all of their years in domestic care are genetically the same as those horses in the wild, as Noelle, but they have spent their entire lives, for the most part, learning that me on the right is pretty much the same as me on the left, as long as I don’t appear out of nowhere in a flash of light. 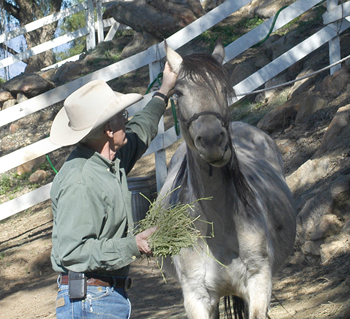 I’ve had many offers of help from folks who have had a lot more experience with Mustangs than I have (none!) and I appreciate them all, but in this adventure I only want one teacher. Miss Noelle. And these daily revelations are why. This should be terrific news to all of you who have dreams of doing something like this but perhaps have felt that you weren’t up to the task. You absolutely are. Remember just a bit more than three years ago, Kathleen and I didn’t have a horse or a clue. So it can’t be rocket science. If I can do it, so can you. You do need a measure of patience. And persistence. You need to commit to doing it on her terms, not yours. But you can do it.

Another reason I want this rank novice, this neophyte, to do this by himself is that I believe in my heart that every horse on the planet wants to be in relationship. With everybody. Remember, as a prey animal the horse’s number one concern is safety and security. And both are satisfied when the relationship is good. And if I can reach a good relationship with this Mustang who had never willingly touched or been touched by a human until me, if I can bond with her, and become her leader, then to me that pretty well proves the point. As the New York Times said in an editorial after Barbaro died: You would have to look a long, long time to find a dishonest or cruel horse. And the odds are that if you did find one, it was made cruel or dishonest by the company it kept with humans. It is no exaggeration to say that nearly every horse – Barbaro included – is pure of heart. 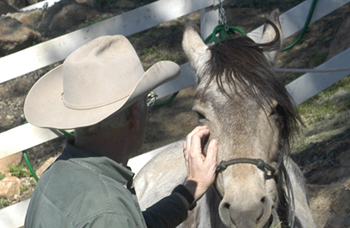 Did I really believe, in the beginning, that it was going to take this long just to be able to scratch her on the neck… on one side? Probably not. But I did know that I was going to take the time that it takes, and that Noelle would be calling the shots. Not without leadership, where possible and appropriate. But every advance would be her call. That’s why I have not put a rope on her, even now when it would be easy to do so. All of our sessions are at liberty.

Would a rope speed up the process? Undoubtedly. Would it harm the relationship in the final analysis? Probably not. But would she be as willing a partner if I took her choice out of the mix? I doubt it.

In addition to the photos throughout, all taken on Day 44, Kathleen shot video on Day 46. Take a look at the difference just two days can make. She is such an amazing girl and for those of you who have been following our progress you will probably enjoy seeing her thresholds crumbling even as we were taping.

A final note. I’m actually writing this on Day 47, the day after shooting the video, and I started this morning working on her left side with my right hand, completely reversing the setup. It took at least 20 minutes for her to even take a bite of hay and another ten minutes for me to be able to touch her favorite spot, right below her eye. But finally she allowed and I was even able to pick out an eye booger ?. That’s probably all we’ll do for a few days because the next four days are supposed to be pouring rain. But I’m very convinced that it will not take as long on the left side as it took on the right. And now I’m wondering, once she accepts my right hand on her left side, will she accept both hands on both sides… or not.

P.S I think I saw the baby move today ?

Barely eight years ago Joe and Kathleen Camp entered the world of horses without a horse or a clue and very quickly found their questions steering them into uncharted and controversial waters on a collision course with the ultimate discovery that most "domestic" horses in the world are being kept and cared for in a manner that is diametrically contradictory to their genetic design. Since that moment they have both become passionate advocates for change. Kathleen is a lawyer specializing in litigation and is now teaching American Literature at The Webb School. Joe created the international canine superstar Benji and wrote, produced, and directed all five of the Benji movies and various television programs. His recent book The Soul of a Horse is a national best seller and in its ninth printing. Even with all the accomplishments and media exposure, Camp is still in awe of his own success. “Inside, I’m still a kid sitting in a dark theater in Little Rock, Arkansas, watching Disney’s ‘Song of the South’ or reading books like the Black Stallion with happy tears rolling down my cheeks,” he says. “To be able to bringt that kind of happiness to others is very special.” For more, click on the About Joe & Kathleen link in the header bar above.
The Soul Of A Horse Blog
Copyright © 2020 All Rights Reserved
iThemes Builder by iThemes
Powered by WordPress