Fearful Kathleen and the Wild Mustang 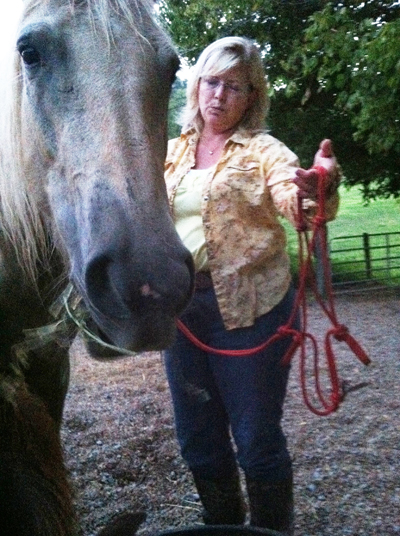 It was late. And getting darker by the second. We were down for our No-Agenda Time with Saffron and Firestorm, just chatting away, pretty much ignoring the two nibbling hay at our feet. Suddenly, without a word,  Kathleen bolted out of her chair and strolled over to the panel where Saffy’s halter was hanging. The halter she had never yet worn. For days I had been rubbing it on her back, legs, neck, and occasionally letting it “slip” across her face. But I hadn’t yet dared to attempt to slip it over her nose. She was still worried anytime it got close to her face.

Kathleen snared the halter off its hook  and strode calmly and confidently back over to Saffy. Who is this? I wondered. Not my fearful ever-cautious wife who still doesn’t like to be in the same pen with Noelle, our other mustang. Or even in the tight quarters of the barn breezeway when two or three horses gather. She slowly and methodically began what I would call a classic Monty Roberts, Clinton Anderson, or Pat Parelli drill, rubbing Saffy from back to front, top to bottom, with the halter in hand. The perfect approach and retreat, sliding close to her face then backing off to her withers or all the way back to her tail. I was in awe. On and on this went as daylight dwindled into darkness.

You picked this time on purpose! I wanted to say. Kathleen hates to be in front of the camera. The camera which I didn’t have with me anyway because all this was a complete surprise. So it was just me and the iPhone. And no light! I clicked away having no idea whether anything other than darkness was landing on the lens.

Finally (photo above) she began the serious work in earnest. And very soon there it went… 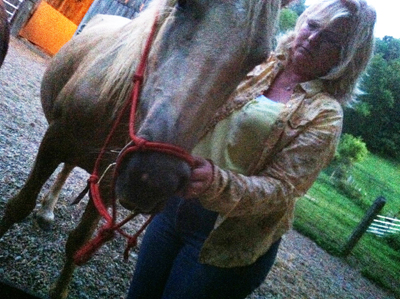 …right over Saffy’s nose as smoothly and effortlessly as if Kathleen were haltering her Skeeter. A complete non-event because of the time and effort she had spent working slowly and confidently up to the moment. Still, a threshold crossing for both. 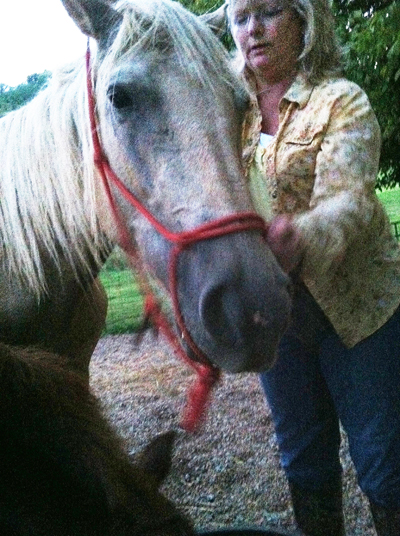 Kathleen had managed to internalize the fine points of keeping her adrenaline down at a moment when, no matter how trusting Saffron had become, this was going to be a first-ever time for that scary horse-eating halter to slide onto her head.  That fact alone is enough to send human adrenaline soaring, which in turn will send horses flying. Kathleen knew that, but was able to keep her herself calm, and Saffron’s trust in place. She slipped the line through the loop but didn’t actually tie it, snugging it up for a few moments before slipping the halter off and letting Saffron help herself to a few munchies. Then the entire drill was repeated for good measure. And by now dark was completely upon us, so no photos.

“That was awesome!” I exclaimed. “Simply extraordinarily awesome!”

“The most amazing part of it,” she said, “was that you didn’t open your mouth for more than fifteen minutes. Never said a word!”

“I was dumbstruck,” I smiled. “You were amazing.”

She was very calm and relaxed about the entire thing. Until the next morning when she finally exploded with a grand “Eeeee Hawwww!” And did a little dance around the kitchen. How many people get to be the first human on the planet to successfully halter a mustang fresh from the wild.

The next evening the routine was repeated but took much less time. And once again, Kathleen slipped the line through the loop but didn’t tie it. Then the next morning – when there was plenty of light thank you very much – she walked right up to Saffy, slipped the halter over her face…. 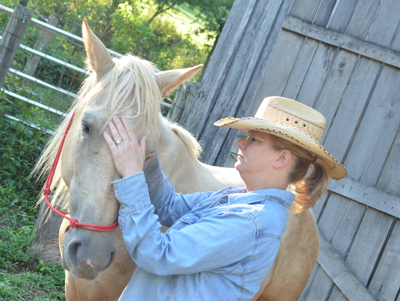 …slipped the line through the loop… 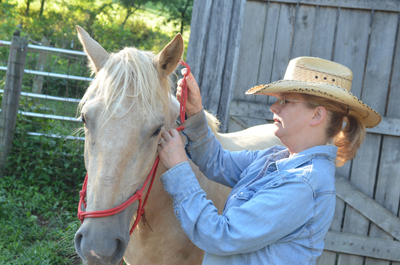 … and tied the knot… 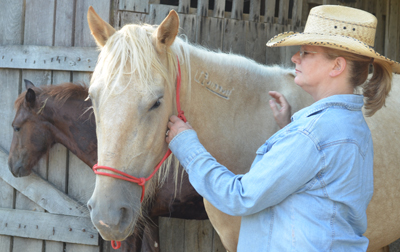 …leaving me with nothing whatsoever to do. 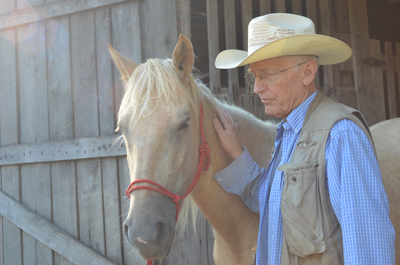 My job done I could only say, “Thank you my Sweetie. Congratulations. And welcome. You’ve taken a giant step. This horse trusts you implicitly. You’re no longer just the face behind the camera.”

I am so proud of her.