Patience has never been my long suit. And the ability to panic at the least little thing seems to be embedded in my genetics. So maybe you can imagine what was going on in my tummy the morning that Noelle, our unhandled wild mustang, decided she would take a walkabout out in the free world.

Like son like mama. Malachi, her baby, often had liberty time outside his playpen when we were loading the Gator to feed the herd on the hillside. He just wandered around freely, stealing feed from the Gator, getting a rub or a scratch, pretty much whatever he wanted to do. Until one day he decided to go exploring (see Quite a Morning Adventure for Malachi on our blog list). After a freak storm-related accident killed him I would often leave the gate to his playpen open, just for emotional reasons. For me. Wishing he would walk through just once more… and certain that as nervous and freaky about new things as Noelle was she would never venture out through the gate.

I couldn’t have been more wrong.

I was piling hay in the Gator a few mornings ago when a strange sound turned me around and there she was… standing on the driveway. Keep in mind that even though she is finally allowing a bit of grooming, even combing of her mane, she has never worn a lead rope, nor has she been led in any fashion. I gulped – a big one – squished my adrenaline down as far as it would squish and said to myself Okay, what now?

At the moment she had the upper hand. There was no angle I could achieve that would direct her back into the playpen, so clearly this was going to be an adventure. I found it fascinating that she was so calm. Usually the slightest change would bring on a wide-eyed spell of huffing and puffing. Move one feed tub to the other side of the stall and you’d think a cougar had just walked in. But here she was, out where she had never been before, and she was as calm as a cucumber. And very curious. She looked up at the house, high on the hill above her.

Oh no, I thought.

There’s a very steep hill of boulders behind the house. If she got off down that hill she would not be safe and there would be very little I could do to direct her back up.

I attempted to calmly slide around behind her and get a better angle… just as she decided to have a look-see at that structure up on the hill from which we were always coming and going. At one time or another all of our horses have been loose within the perimeter fence, but only one of them, my Cash, has ever been brave enough to venture up the narrow drive behind the garage.

Now there were two. Cash and the wild mustang.

When this photo was taken I had no idea
that she was planning a walkabout.

I sprinted up the steps to the front door, a wad of alfalfa in one hand, slipped through the house to the back door, and eased out onto the driveway just moments before she reached the edge of the hill. Paying careful attention to body language, hers and mine, and talking softly, I walked up slowly and offered her a bite of alfalfa while cutting off her access to the hill. She sniffed it but didn’t eat. Then she turned and quite calmly ambled off back down the driveway. This walkabout was becoming a terrific learning experience, hopefully for both of us. I followed her down without agenda other than attempting to subtly control her direction by turning and twisting my body. I’ve forgotten which clinician painted this picture but it works: pretend that a long pole is extended from your belly button. Wherever you put the end of that pole will affect the direction your horse moves. Noelle wanted to climb onto the lawn in front of the house but a twist of my torso past her drive line put the end of the imaginary pole right by her left eye and she calmly turned back onto the driveway. She stopped. I stopped. After a bit of sniffing, I clucked, and took a step forward. She walked on. This was becoming fun.

Kathleen had seen Noelle leaving the playpen from the kitchen window and was already out with the video camera. Here I am with a loose mustang and she’s not thinking how to help, but which camera to grab. I asked her to block the pathway to the hillside pasture where the rest of our herd resides. The concern was that if Noelle managed to get over to that pasture to socialize with the other horses there would be no way to get her back without a lot of raised adrenaline levels. So far this had been an interesting and good experience for all concerned. I hoped we could keep it that way.

Sure enough as Noelle rounded the garage and spotted the pathway to the hillside pasture she began to trot straight for it. Kathleen did her “calm cougar” imitation and Noelle turned at the last minute and started up the front steps to the house. To my knowledge she had never been on a step before. The steps fork and I had no choice but to hurry to block her option to the right, which would lead to the steep hill behind the house. She weighed her remaining options. Either leap over the stone wall to get around me, or go on up several more flights of steps. I offered her my standard greeting, a bite of alfalfa. She contemplated, thus relaxed a bit, then turned fully around and moved off down the steps. This was her freakiest moment as she sorted out navigating down the eight steps. Kathleen was still blocking the path to the pasture so she wandered off down the driveway, unfortunately past the entrance to the playpen. I chose not to follow because to push her into a dead-end at our property gate would be to likely cause her to make a bad decision. I waited.

Eventually she wandered back up and I calmly pointed to the right while blocking her other options. She took the point but ignored the playpen gate, instead wandering off through our “covered bridge” to the tack room then down a very steep hill to our small arena. Kathleen shot video and I just watched for a while as she wandered around the arena sniffing here and there. She had watched Malachi’s every move from her stall – with frustration – the day he made the same trip. 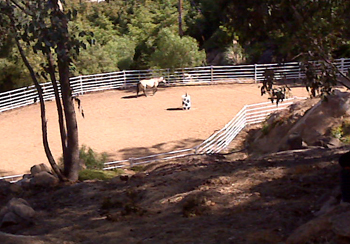 She didn’t appear to have any immediate plans to come back up so I ambled down, went in, and offered her a bite of alfalfa. This time she took a bite, then I slid off behind her and urged her to move back up the hill. When she reached the steepest point she broke into a lope and tossed a playful kick off to one side. That brought a smile. She was having fun.

At the top of the hill she dropped right back into a curious walk sniffing her way through the covered bridge whereupon she met Kathleen with her arms spread wide, a handy stick in each hand, projecting at least a twelve foot wide profile. No waving. No noise. Just body direction. When I rounded the corner huffing and puffing from the climb Noelle was walking calmly back into the playpen. I followed her in, closing – and locking – the gate. She nibbled a bite of alfalfa from my hand and got a few kind words, and the event was over. Without incident. And with very little to-do or raised adrenaline levels.

I was very proud of Kathleen. At that moment in time she had never even touched Noelle. And was very aware of how extremely freaky Noelle can be on occasion. To keep her head, to stay calm and focused and just go with the flow was difficult enough for me, but a monumental challenge for Kathleen who has a “flight instinct” that, at times, could match Noelle’s. But in the end, Kathleen is the one who quietly directed Noelle back home. And I didn’t even get to see exactly how she did it. What moves she made. And, beautifully, she doesn’t remember. Which means her experience is turning into instinct. Yippee!

It was a terrific lesson for all of us. Noelle learned that we could cause her to move wherever we wanted her to move. And she allowed us to do so, which is the very essence of herd leadership. Who moves who.

Kathleen and I learned with clarity that keeping your head works. That being calm and thinking a problem through works. That patience works. As Pat Parelli says taking the time that it takes works. In spades. Whether you’re out on a walkabout with a wild mustang or solving a problem in your everyday life.