“Maybe he taught you something quite extraordinary that will help the lives of other horses in the future.”

Last night I finally bit the bullet and began reading the huge stack of cards and letters that you sent to Kathleen and me after Malachi’s death. I had put it off time and time again. I considered not packing them when we approached the move to Tennessee. I knew they were all full of love and compassion, but I still couldn’t open the first one. I did pack them to go to Tennessee and when that box was unpacked I piled them all onto the table behind my desk, there to stay to confront me everyday until I finally pulled out the letter opener. As you’ve no doubt heard me say: we manage by focusing forward. Not backward.

A couple of weeks ago Kathleen was wandering through the hundreds of pictures she had taken of Malachi and sent me one I had never seen. It broke my heart. I cried it seems for hours. So the piles of cards and letters just sat, and sat, for more than four weeks.

I was up way too late. But I read every one. Every word. At one point over the last several months I vowed to answer every one personally but last night I changed my mind and ask your forgiveness. I just can’t. But I thank you each and every one for all the beautiful words of love and hope and care and concern. The headline above is but an example of how each message attempted to buoy us, to help us get through it. To refill the vacuum.

Nothing can, of course, but we so appreciate all the efforts.

I was in the pasture all day today running electric fence. It was only the second day since we arrived in Tennessee with sunshine, and there wasn’t a cloud in the sky. Cold, still muddy, but beautiful. I had a lot of help from the herd. Unfortunately Kathleen was in California and wasn’t here to document it. At one point the herd wandered off to the far end of the larger pasture and I glanced over at Noelle in the paddock behind the barn, and this picture of Malachi stepping onto his platform flashed through my conscientiousness: 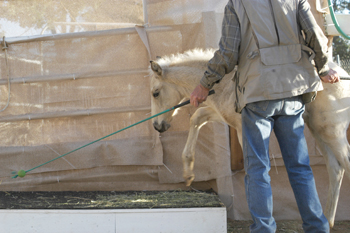 Because here’s what I saw: 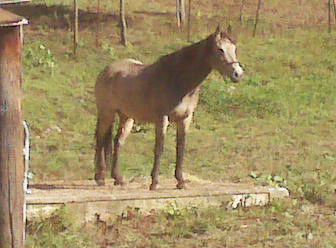 It’s a concrete pad, about a foot off the ground, behind our new 100-year-old barn. She has never – to my knowledge – been on that platform. She still walks huge circles around anything new  or never seen before. Right or wrong, I believe what she saw Malachi do over and over convinced her that such was okay, it could be trusted. Actually Malachi’s little platform is just out of frame to the left and I wished that it had been out there where she’s standing… wondering if she would be on that as well… for what she appeared to be doing was to stand taller in an attempt to see the herd which had wondered off over a hill toward the far end of the larger pasture.

As I stood there watching her, cell camera in hand, I also thought about this photo: 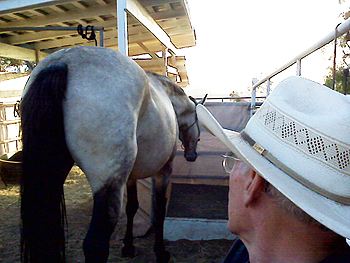 This one was taken just a couple of weeks after Malachi’s death. One of Noelle’s first times in Malachi’s playpen. She left Kathleen and me and the alfalfa sprinkled at our feet and walked over to sniff around her baby’s platform, which by his third month he would often climb upon completely on his own and hang his head over into Noelle’s (open) stall, surely saying Look at me mom. I’m a big boy now.

Kathleen and I Skype every night. We used to sit around the dinner table after the kids had had enough adult conversation, just talking about stuff. We miss that. So we Skype. Last night I tried to read to her phrases from some of the letters, but she wouldn’t listen, still not ready. I wasn’t either, but I finally read them and I thank you so much. It’s the stuff of life. Which is so much better than the alternative.

I love you guys.