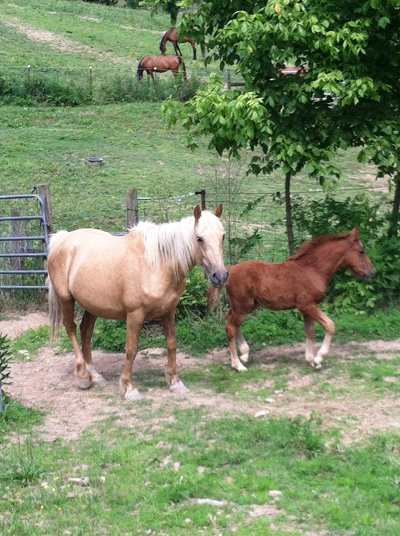 Saffron and Firestorm enter the eastern pasture for the first time with other horses. We chose Skeeter and Mouse to be first because it’s been obvious for some time that, across the fence, Skeeter wanted to be Uncle Skeeter to Stormy. He’s been a good uncle to Mouse but she’s all grown up now. 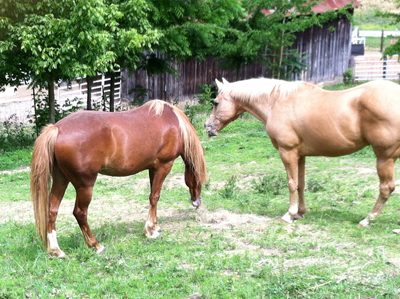 Skeeter (on the right) has never really felt like a part of the herd. When he’s with them it’s always off on the periphery. And often he’s even munching in the western pasture when the herd is in the east, and vice-verse. Probably because (I don’t believe) he was ever out of a stall during his first 18 years of life except when he was team roping or doing dressage. Never with a herd. The first time we put him out with the gang back on the hill in California he just stood there and gawked for most of the first two days. I truly don’t believe he had a clue what to do. Or not do. Now, sometimes Mouse will hang out with him, but just sometimes. Usually when she’s having issues with someone else. As Skeeter watches Mama and baby enter the pasture, with no fence between them for the first time, it’s obvious he wants to connect. He’s been fascinated with Stormy and will stand by their paddock for hours for a sniff here and a sniff there through the fence. And Stormy has been just as fascinated. I believe she thinks he’s family somehow because he looks just like her mommy. Kathleen and I will never forget the first time Stormy saw Skeeter. I swear she did a double-take! Then checked to see if mama had leaped over the fence.

Skeeeter’s a lot like me. He wants to see the best in people… uhh horses. But that’s not an especially intelligent way for a calm, giving, trusting old guy to greet a mustang for the first time. Especially if he doesn’t have food in his hand. 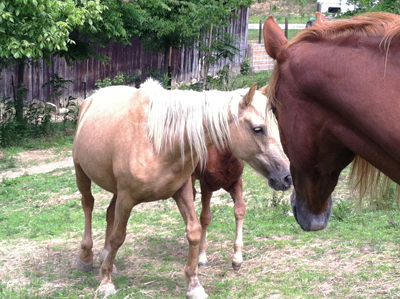 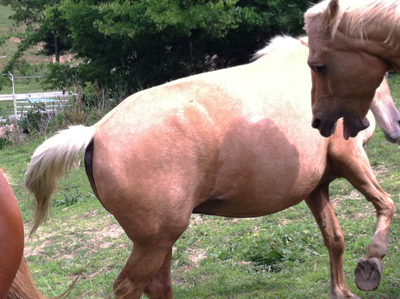 Two rear feet right to the tummy. It seems to be the mustang way, and for those who haven’t experienced it they are FAST! She and Noelle can spin and kick faster than I can… well… point the iPhone. And, obviously, faster than Skeeter can get out of the way. Thankfully the rest of the photos are from Kathleen’s camera up the hill. 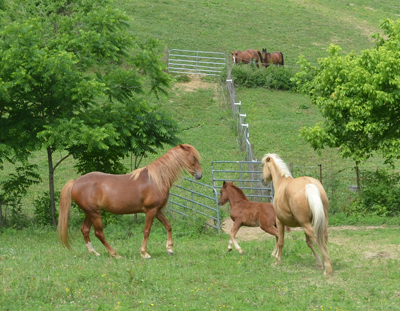 Saffy then turns to Mouse. 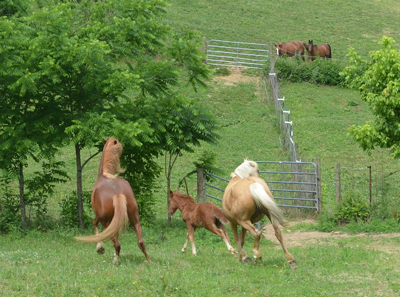 …spins as Stormy hustles out of the way… 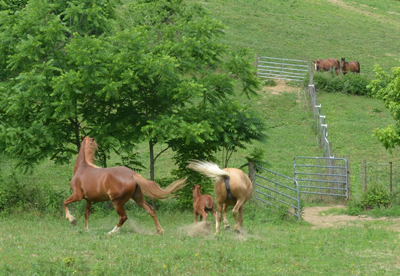 …and Mouse leaps sideways saying no thank you very much!

Note Cash (with Pocket) at the western pasture fence in the upper right. He’s taking it all in and I can promise you he won’t be getting anywhere near Saffron when it comes his turn in the pasture with her. He’s a very mild mannered, very polite boy and doesn’t do fisticuffs at all. He was the herd leader back when it was easy and his horses would listen to reason, but when mustangs began to hit the scene everything changed. And being the leader simply was not that important to him. He’s a lover not a fighter :). 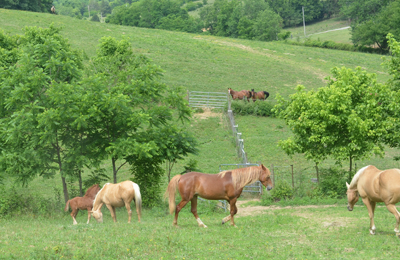 Mouse slinks back over to Uncle Skeeter.

Note in the high upper left corner you can see Noelle on the ridge, our other mustang and the current herd leader. When this photo is blown up you can clearly see that she is watching the goings-on intently, no doubt plotting her strategy for when her time comes with Miss Saffy. A confrontation I’m not particularly looking forward to. It won’t be happening anytime soon. 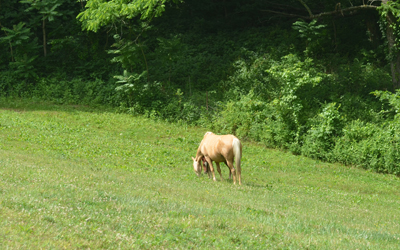 Meanwhile, with the dominance issue now settled,
Saffy and Stormy stroll calmly on up the hill.

Interestingly there wasn’t another harsh word spoken for the rest of the day. One of those mysterious things we humans find difficult to wrap our arms around with horses. I do believe you could’ve heard Saffy’s rear feet smack Skeeter’s belly all the way to Bismarck, but once it was done, the point made, it was over. For her, and for him. And he seemed absolutely none the worse for wear. She wasn’t being mean. She was getting straight to the point.

Which is who moves who in the herd. (See What is Leadership? –  in the menu bar above.)

Our mustangs have both bypassed snipping, nipping, and biting and gone straightaway to the tactic that will put the leadership issue to rest immediately. I suspect this is what they’ve been taught from the moment they were born. There are no humans out there in the wild telling them to make nice-nice. As Saffy might say: We don’t have time to spend hours or days settling this issue of who leads who. There are predators out there to worry about. 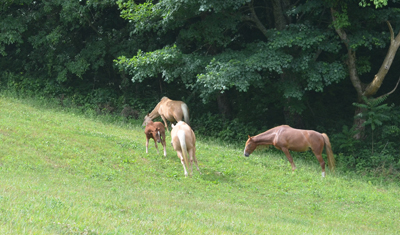 After a bit Skeeter and Mouse climbed the hill to join the mustangs. Skeeter with purpose because he still had a connection to make. A relationship to forge. Mouse because Skeeter went, but she kept her distance from Saffron. In the photo above, Stormy is easing over to Skeeter. Note that Saffy is completely unconcerned. Oh, and the easy way to tell who’s who in the photos that follow is that Skeeter’s mane is a lefty, and Saffy’s mane is a righty. And Skeeter has a small white diamond on his forehead. Kathleen also says that Skeeter has Shrek’s ears and Saffy has Yoda’s, but I wouldn’t want them to hear that :) 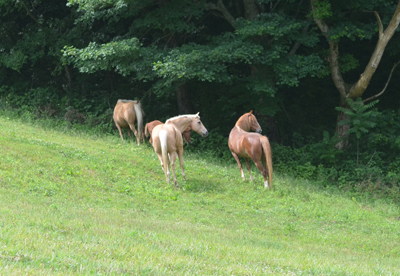 What’s going on over there?!

The four in the western pasture had suddenly unleashed a first class conniption fit. 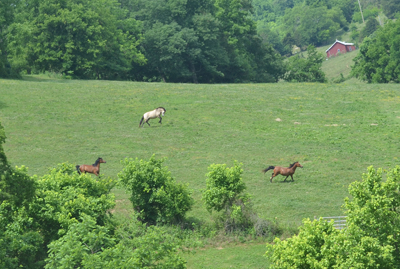 They clearly didn’t like being left out of all this. Lots of hollering, racing back and forth, kicking and bucking. They were putting on quite a show. 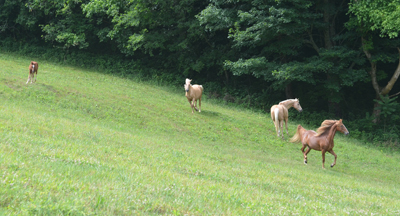 Mouse couldn’t help herself. She had to go check it out. 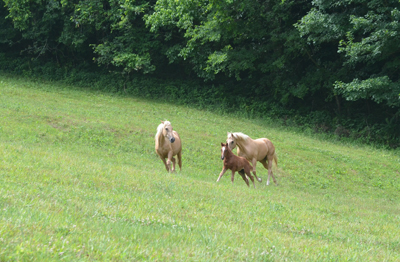 But Skeeter just calmly followed Saffy and Stormy on up the hill. This is so out of character for him. He’s never followed anyone around since he came to us almost six years ago. Well, he does follow Kathleen around, but not horses. Ever. Yet this young whippersnapping mustang who just kicked him in the belly and her barely two month old foal have completely mesmerized him and turned him into a horse I’ve never seen before. As they ambled on up the hill… 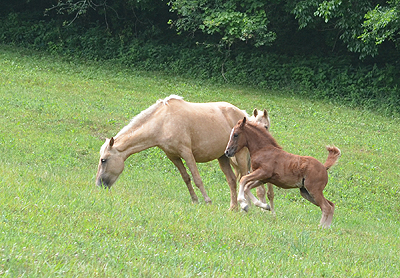 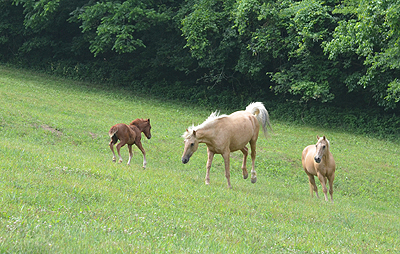 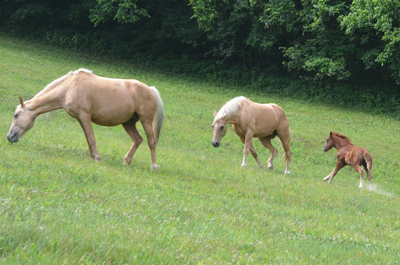 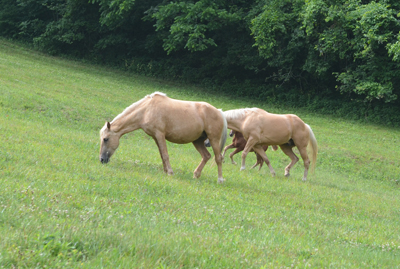 Stormy was quite comfortable with Skeeter
between her and mommy. 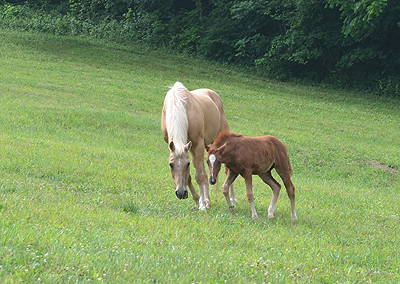 A real relationship began to flourish.

As we so often plead: because the horses made the choice. No one forced this relationship on either one. I love this for Skeeter. He’s doing something he really wants to do and now feels he is a part of something. What a good boy! 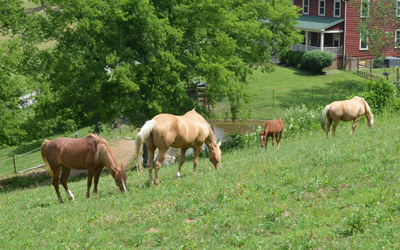 At the far eastern end of the pasture by the pond Stormy went back and forth between Skeeter and Saffy. And mama never even visibly took note. She has accepted the new relationship. Perhaps is even happy about getting a break now and then :). 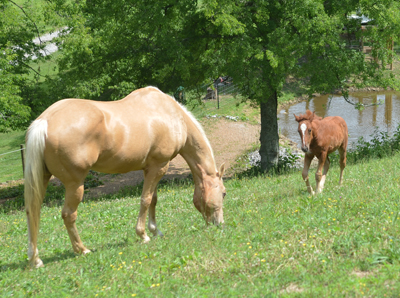 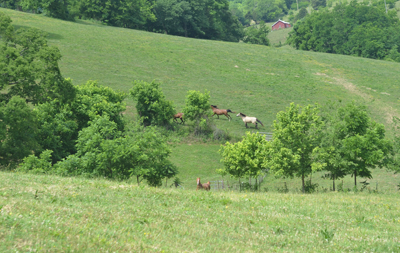 Then adrenalin rose again out west. 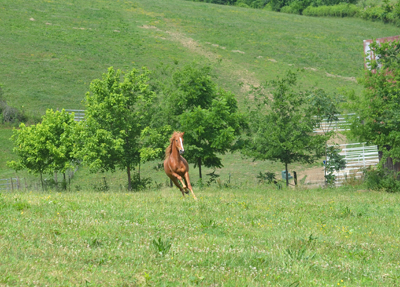 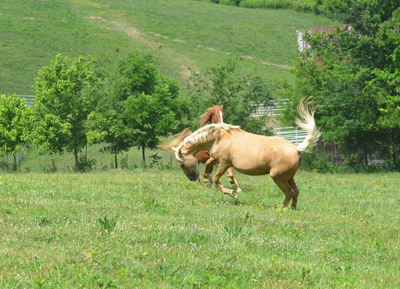 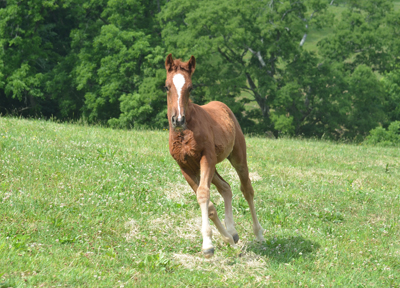 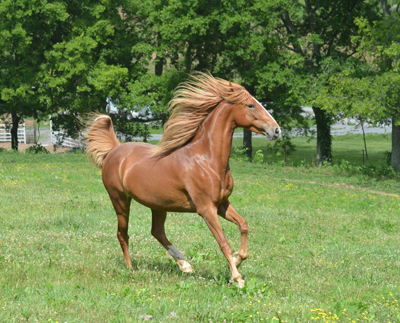 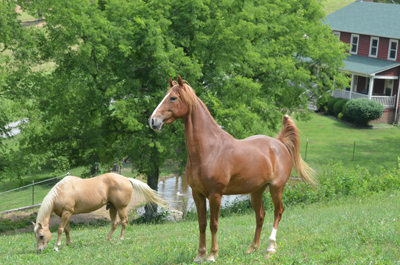 Wow! That was something y’all!

Did you guys see that?! 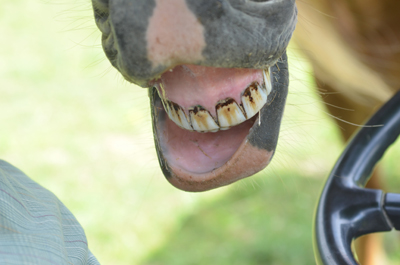 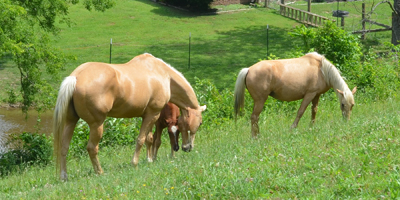 “No, Mouse. Sorry, Actually I was watching this.”