Quite a Morning Adventure for Malachi! 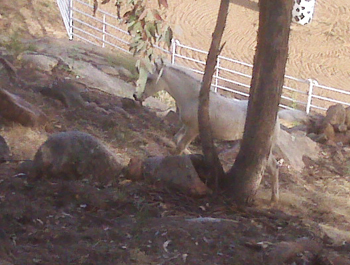 What a spectacular morning! Malachi really stretched his boundaries on his at-liberty walkabout. Although today it was a race-about. He had never ventured farther than the far end of our tack room (which is right next to the hay shed where I load the Gator for the hillside herd feeding) but this morning with no concern whatsoever he just kept trotting and went all the way down to and into the arena which is at least 100 yards down a steep hill and around a sharp turn. This was his first trip ever into the arena. He raced from one end to the other a couple of times, then raced back up to the tack room. I stepped toward him and he wheeled and raced (I mean RACED) down the little road back into the arena, then back out and up. Very proud of himself. I decided not to give him the opportunity to learn that he could run away from me so I just ignored him when he was close by… and watched with a big smile when he was down in the arena. He wasn’t on guard or worried at all. Just curious. This was his time, and I relaxed and enjoyed watching his little brain at work figuring things out. He must’ve run the full circuit from tack room down the road to far end of the arena 8-10 times. One trip he missed the gate into the arena and did a perfect slide stop at the fence. Then stepped around the gate and took off again to the far end. Mama was pretty much beside herself at first and I loved it that I was up near her and she could see that I had nothing to do with all this. She would go down into the lower stall (which overlooks the arena) and watch Malachi racing around, then she would trot back up and look at me as if to say: Aren’t you going to do something?? I just shook my head. It’s your baby.

Finally Malachi nosed around the outside of the arena and discovered the shortcut path up to the lower stall where mama was monitoring it all. He trotted right up the path (the cell phone photo above) and hung out with mom across the stall fence for a bit. I was just before going to the far side to urge him back toward home when he came around and wriggled through a narrow space between the tall rocky hill and the lower stall and climbed the rocks back up to the outside of mom’s upper stall. Then with a single point from me he trotted right back into the play pen, into mom’s stall, and started nursing, quite the proud little boy. Well, not so little. A few minutes later he was back at the closed gate asking me if he could come out again. Maybe later, I said, and gave him a couple of rubs and a treat then headed out to feed the herd on the other hillside.

While watching him race back and forth I kept thinking about a statement Kathleen made one day when Malachi was galloping circles around the paddock. “Just think of all the foals locked up in stalls who never get to do this.”

His feet btw look sensational. No need for any trimming yet.

Today Malachi is two months plus two days old… And BIGGG! (see below) The photo above, again, is of him trotting up the “shortcut” from the arena (which you can see in the background down the hill) toward mom’s lower stall. The photos below were taken two days ago. See what I mean when I say BIGGG!. 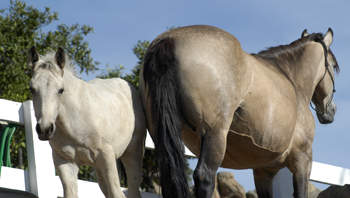 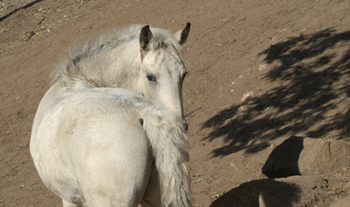 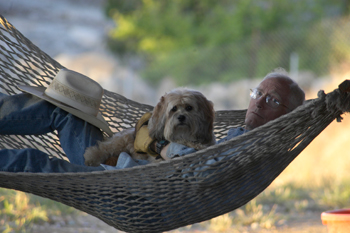