Reading the Eyes of a Horse 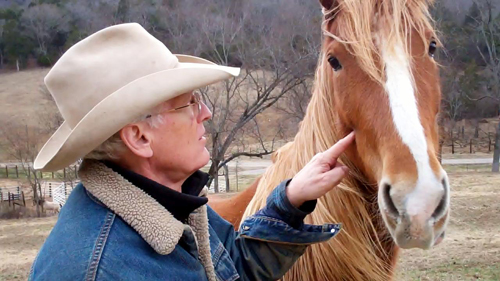 I can remember the vet checks on our very first three horses. I was walking Cash down to the arena with Dr. Matt and he casually mentioned, “He has a good eye. A soft eye. That says a lot.” I could only wonder what he meant. What could he see that I couldn’t? And what did it tell him? But I chose not to embarrass myself and I kept quiet.

Much later – after learning that either I lose the fear of being embarrassed or I would never learn anything :) – I asked him about it and he told me what he had seen. A soft horse, one with whom relationship would be easy and special, not a horse prone to flip out and be distant and resistant at every excuse; a polite horse, and a very bright horse.

By that time in my lengthy experience with horses (almost six months) I could somewhat understand the first two comments but asked, “How could you tell he was bright? What specifically did you see?” Dr. Matt had trouble answering that. “I’m not really sure,” he said, “Comes with time and experience I suppose. He looked alert, curious, willing to explore. He paid attention.”

All of this was brought to mind by Kathleen’s photo above. Me and Mouse, our rescued Saddlebred, and a moment of discipline. I love this photo because I can (at last) see in her eyes all that she is. It’s all there in this one snap of a shutter. Willing and generous, very desirous of relationship, but very independent at the same time; very bright and intuitive, like Cash, but not particularly polite, unlike Cash; and she’s very persistent toward a goal. In other words, she can be a pest.

Mouse is number six in the pecking order of our six-horse herd but I never worry about Mouse working her way into the barn breezeway when the weather turns bad. She will drive you or anyone else crazy until she gets her way, doesn’t matter whether you’re equine or human. When a horse shoos her away she just keeps coming back, over and over and over again, until finally the pestered party relents, gives in, and says, “Oh alright! What-ever!” I can see all that in those eyes.

Noelle – our mustang – has always been fed in the paddock in front of the barn. I close two gates and a stall panel at the back of the breezeway and she has – or had – the area all to herself. Cash (now #2 in the herd) was fed just outside the panel at the back of the breezeway. Pocket and Mariah elsewhere in the paddock behind the barn, in order of dominance, and lastly, Skeeter and Mouse (#5 and #6) in the side shed of the barn with the gate closed because, as the oldest and youngest of the herd, they get more stuff, thus take longer to eat and they would lose it to someone further up the chain if left out in the paddock.

But I had to stop feeding Cash out back because of Mouse. While I was feeding others and fetching buckets she would sneak up for nibbles from Cash’s bowl. He would send her away and she would literally swing one step out then be right back with her nose in the bowl. He’d send her away, this time with a snap, but she’d do the same thing, swing just out of range, then be right back. This would go on for some time, then I would look up and see them both eating blissfully away. I told Cash he was not being consistent in his training, but he wouldn’t listen. She was a pest and just wore him down. There was no change in dominance, just a decision on his part that it wasn’t worth the hassle. But I said no because Cash was not getting all of his supplements and Mouse was getting too much. So I started letting Cash into the barn breezeway so Mouse couldn’t hassle him. Noelle, now #1, won’t bother Cash because she will not come in the barn when I’m around, still hanging onto that mustang fear of being trapped.

Mouse will not attempt to steal feed from Pocket and Mariah in the back paddock because they will full-blown come after her and she knows it. So she takes their discipline seriously. Cash, like me unfortunately, has never cared much for confrontation. So we both lack consistency. A trait I’ve had to get better at with mouse, witness the photo above :).

We can learn from both Cash and the meanie mares Pocket and Mariah. Be polite whenever you can, but do what it takes to enforce the rules. Interestingly, in the pasture, Mouse hangs out more with Aunt Pocket than anyone else except her Uncle Skeeter.

I would never want to take away Mouse’s spirit and all-girl personality and have her hang around me with her head on the ground in a coma (like some clinicians we know insist on). That would be easier for us humans I suppose. But it’s really not all about us is it?

Cash is always quiet and polite around me (or anyone really). But he’s never comatose. He’s always alert, paying attention, asking questions, involved. And, now, I can see all that in his eyes. If I were to just meet him, for the first time today, I think I’d be able to see everything Dr. Matt saw back when. How did I get there? I suppose it’s like Dr. Matt said: mileage. Time in the pasture, watching; listening with your eyes. And like Cash: paying attention.

Below are three shots by Pam Mitchell of Mouse learning to bow… and below that a link to the video Mouse – Two Years Later for those of you who haven’t seen how this emaciated scared-to-death little 8-month-old rescue from the Animal Rescue League of Iowa was able to blossom because of the League’s beautiful rescue program. 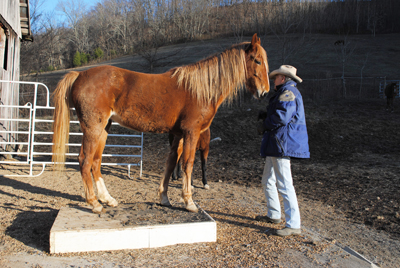 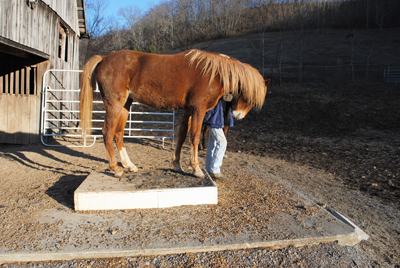 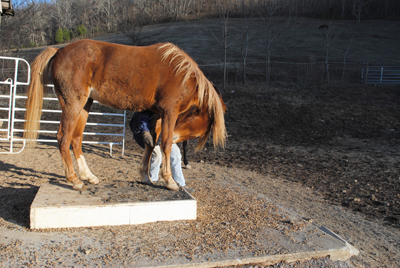