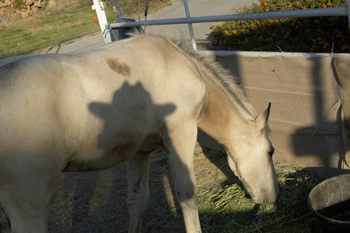 Journal entry of May 25, 2009 – Not only does Malachi continue to grow (I had to raise the plank that keeps Noelle out of his playpen this week) his whiteness is now giving way to the buckskin underneath. Especially on his neck. See the photos above and below. Kathleen doesn’t usually get to show up in these posts because she’s always behind the camera… but she figured that out in the shot above :)

These were taken yesterday afternoon just outside his playpen while we were mixing and loading the gator to feed the pasture five. Every morning and evening while we’re loading up, Malachi gets to wander out in the free world wherever he wants, which is usually not far. He hasn’t yet made a second trip down to the arena like the one described in the last newsletter. Dr. Matt is just amazed at how big and strong he’s getting and how good he looks… and how many stallion tendencies he’s already showing (he’ll be 3 months old on June 3rd – my how time flies). So we’re sorry to say that on Thursday he will lose his manhood. It had to happen sometime as we have no intention of breeding and want him to be able to live a good life with the herd. Still, he’s going to be such a big good looking boy that it makes me sad to do it. 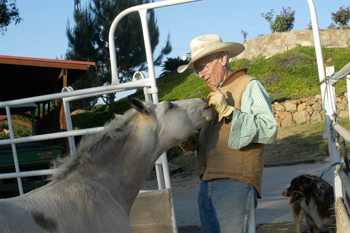 I have to be a bit more careful when working with him these days because now when I get a foot under his hoof it hurts!

Noelle and I have pretty much been treading water since Malachi’s birth. I’ve just been trying to maintain, and not let her slide backwards. Serious work needs full attention and with Malachi around she’s either very annoyed with his pestering, or worried about him if he gets too far away or is locked out. As you might remember, we left her journal with me rubbing her pretty much all over with one hand while she ate hay from my other hand. Recently I decided to trade places and let her do the touching. I stand right by her tub of chopped salad (Safe Starch forage) and hold out my hand for her to touch and sniff. The idea was that as soon as she did, I’d walk away so she could eat. The first time she didn’t like it at all. To eat, she’d have to get closer to me than she ever had without food in my hand. So she snapped in my direction, which is very normal herd activity when challenging for dominance. And I’ve been around her enough (finally!) to know what she was doing. Not being mean. Just checking in with herd hierarchy. So I was able to keep my adrenaline in check, puff up, stand taller, pin my ears :) and   point a finger right in her face. She took a step back, blinked a couple of times, then stepped right up and sniffed my hand. I told her how good she was and left her to eat. Now it’s a ritual. She knows how to get rid of me :) But because she’s making the choice to do it and “stretching her envelope,” I can now walk right past her tub and she just swings her head away to let me pass, instead of jumping back several steps like she used to do. Not a big advance, but an advance. And it’s fun to watch her brain whirling and spinning. 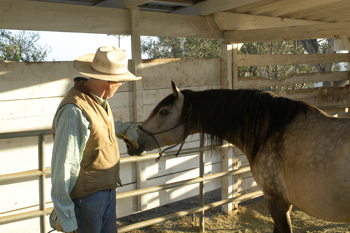 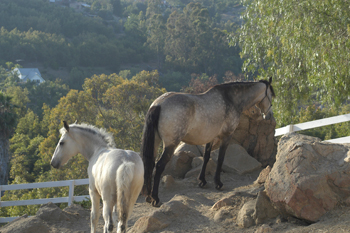