What a Special Lady… This Wild Mustang 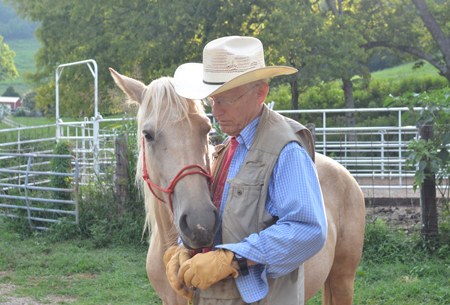 This day had to come. Kathleen had done her part by assuring Miss Saffron that there was nothing wrong with wearing a halter (see our last post). Now it was my turn, the next step. I had to show her there was nothing wrong with wearing a lead rope… and giving to pressure. And I wasn’t particularly looking forward to it. The only time a lead rope was ever put on Noelle, our first mustang, it was an explosive disaster. But these are two very different horses, I kept telling myself. Saffron trusts us implicitly and has said as much often. But as I clipped the rope onto Saffy’s halter neither of us knew that I was about to make a serious mistake.

We all know that mustangs come out of the wild with an enhanced fear factor. They’re taught from the day they’re born that to stay alive they must be afraid of everything that moves and most things that don’t. React first and ask questions later. But Miss Saffy’s gift of complete trust on my birthday had apparently lulled me into oblivious folly. The way I teach a horse to respond to a lead rope is to let them teach themselves. Pull the rope just barely taught enough to let the horse be a bit uncomfortable from the pressure. Then hold it until she takes a forward step which releases the pressure and gets her lots of praise and rubs. Then we do it again, and again, and again, until she has the concept well absorbed. That’s how Stormy learned to walk on a loose line in two days. But she had never actually lived in the wild. And mama wasn’t piling on the lessons in fear because she was no longer freaking out at every little thing. But the minute that lead rope tightened on Miss Saffy she went completely ballistic. Old fears of being confined with nowhere to run leaped to the surface and she started peddling backward across the paddock at light speed, dragging me with her. This was my first “rodeo” and I thought seriously about turning loose and racing for cover more than once. But, inexplicably, I didn’t. And I even remember the moment I realized what was wrong and shamed myself for making the mistake of allowing her to pull on the rope so hard that she felt inescapably trapped. And there were several fleeting thoughts about how calm I was as she dragged me all over the paddock. The years with the herd were paying off. I knew as long as I could keep my balance I was in no serious danger. Saffy is sweet, and trusting, and bonded. But she was afraid. A wild horse with four years of experience living with fear in the wild. All of this caromed through my brain in a matter of seconds. While I was desperately looking for a moment to catch up and loosen the line to take the pressure off. It came when she backed onto a small mound of pea gravel and her back feet almost slipped out from under her. The line went slack. I advanced, talking softly and calmly to her, and managed to keep the line loose, hopefully restoring her trust.

“Easy, Miss Saffy. Easy,” I whispered, moving ever closer. Her eyes were wide, nostrils flaring, and her breathing was heavy. But I felt confident about her inner self. I believed she would respond. And she did. Her eyes narrowed and her breathing eased. I stroked her forehead, then both cheeks with both hands. She came back to me and I offered her a treat. At first she said no thanks, then had second thoughts and munched it down. I put the tiniest amount of pressure on the lead rope to the left, easing her face around to see another treat in my hand. She responded, and took the treat. Then I moved the line to the right, and again she responded, and took another treat. The halter came off. She got a rub on her face and neck and I walked away, leaving her to think about it.

It was scary, but a good beginning, I thought. For both of us. It was my first such wild and wooly experience and I was happy I stayed with it when I wanted to drop the rope and run. And happy that I got her back and was able to leave the experience positive instead of negative. And I vowed to not let that mistake happen again. 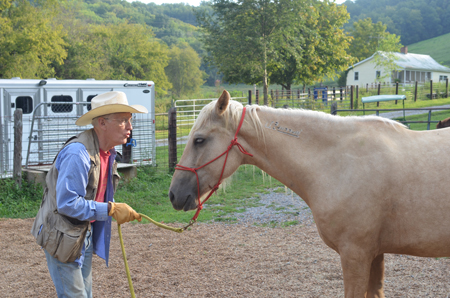 The next morning, happily, with Kathleen available to shoot, Saffron showed no resistance to the halter and lead rope. No bad memories. And I was mentally set to never allow that rope to get tight, to become restrictive, to make her feel trapped or confined. I thought about Chapter 22 of The Soul of a Horse. Cash had gotten his lead rope wrapped around a hitching post and felt suddenly confined. He freaked out and yanked the entire hitching post out of the ground. From that moment, he could never be tied without freaking out. The ultimate solution was Clinton Anderson’s Aussie Tie Ring which allows the lead rope to slide through the ring, telling the horse that he can get immediate relief from the pressure of being tied. With the ring, Cash quickly began to realize that he wasn’t actually tightly confined and he would relax. We’ve never tied any other way since.

And that would be the procedure for Saffy on this day. The first time I put tension on the line, she wanted to back away from the pressure. I merely let the rope slide through my hands until she stopped, which was almost immediately. Then I held an ever so slightly taut line asking her to take a step forward. 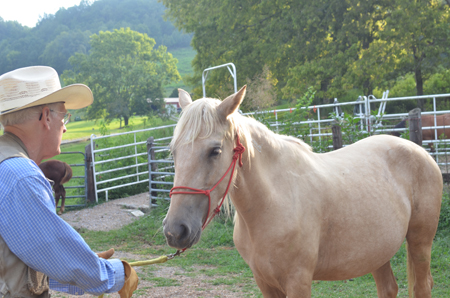 She stared at me seemingly forever. I dangled a treat and finally she reached as far as she could reach without taking a step, and I let her retrieve the treat. Then I moved away, getting beyond her reaching range unless she took that all-important first step. 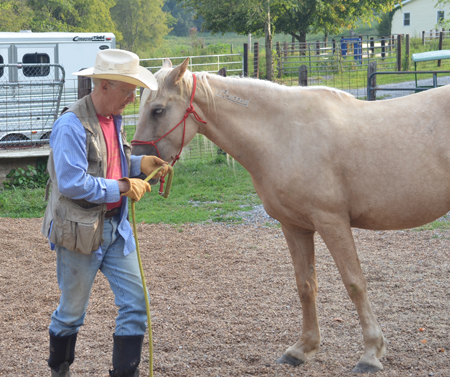 The line went slightly taut. Even though intrinsically I KNOW this stuff works it’s still sort of amazing to me when it does. She reached as far as she could reach but it was no longer enough. She thought about it, only for a moment, and then took that first step. 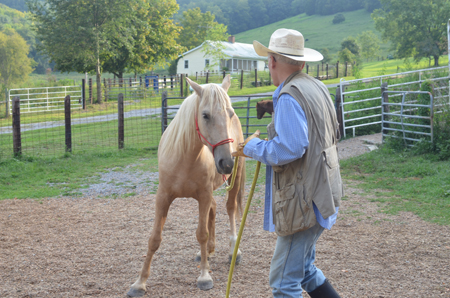 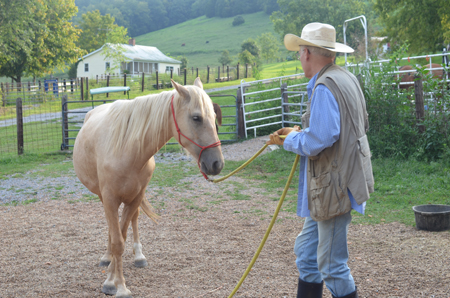 And another, her resistance dissolving away, steps coming faster. 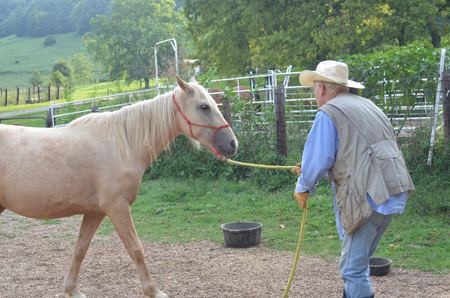 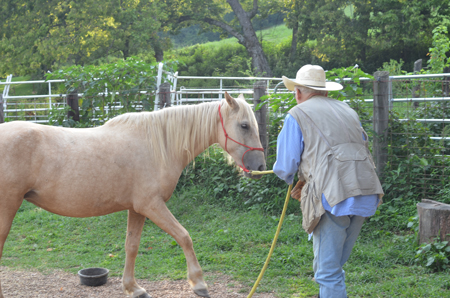 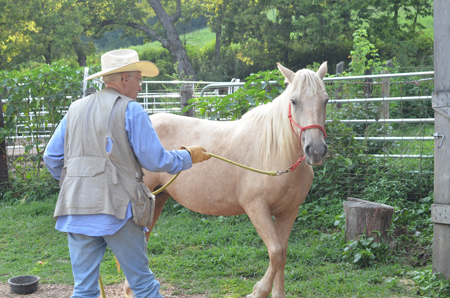 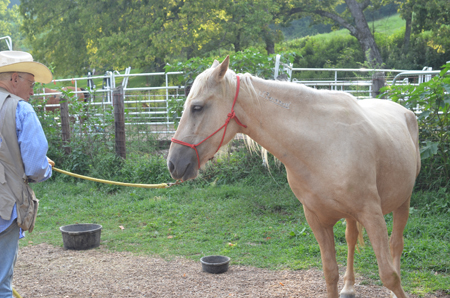 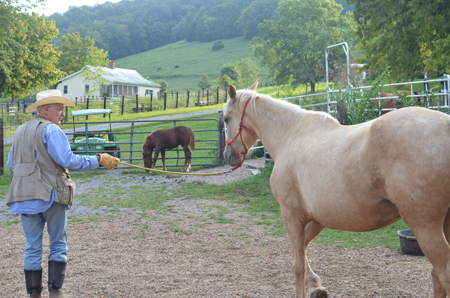 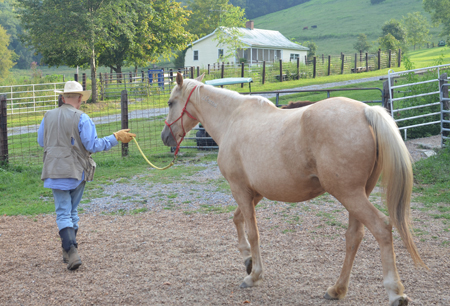 I gave her a treat, much praise and rubbing, and removed the halter. This is how I wanted to leave it. With her thinking about following that loose line, even in and out of circles. My teeth were clenched down tightly on the enormous EeeeHawww trying to escape. This was, after all, a pair of all-time firsts. The first time this wild mustang had ever taken forward steps on a halter and lead rope… and the first time ever that I had been on the other end of such first steps (except for our two babies). It felt spectacular. But I walked off as calmly as I could, trying to act as if this was just the way things were supposed to be. 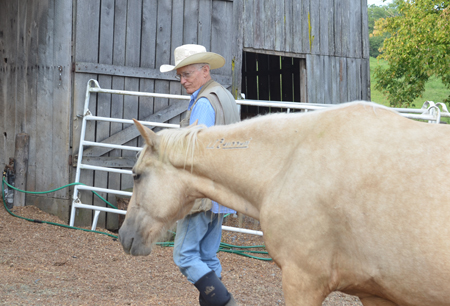 Made me wonder why we were messing with that silly lead rope anyway :). 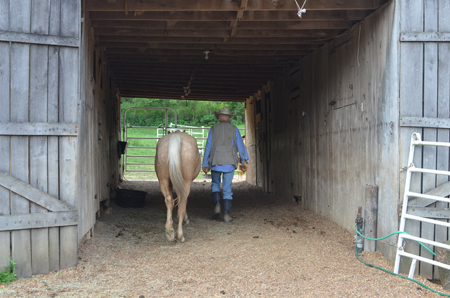 Oh yeah, now I remember. This horse is a wild mustang. Would that they could all be like this lady. Our very special Miss Saffron.