Today marks the one-year anniversary of our southern California herd’s arrival in middle Tennessee, and what a year it’s been, moving from this: 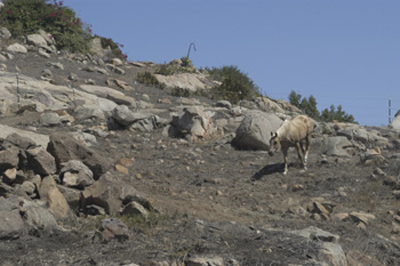 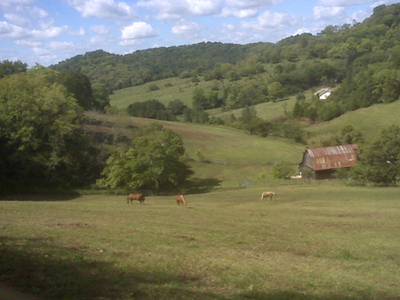 Last September 17th our horses arrived, after dark, amidst seven inches of rain that went on to become 26 inches over the next four weeks. We were worried sick about their feet which were accustomed to the kind of terrain that horses are genetically designed to live in, like the Great Basin where they evolved for millions of years. Hard and rocky. Not unlike their California home (top photo above). We had no idea that we were moving into the wettest fall on record in middle Tennessee and our horses would not even see dry ground for months, never mind hard and rocky. And we had been warned over and over again that the herd life style would have to change, that horses cannot be out 24/7 on the rich sugary grasses of middle Tennessee. But we were determined to trust ourselves to figure it out. Determined that our herd would continue to live as natural a lifestyle as possible. And two of the most important elements of a natural lifestyle are lots and lots of movement… and lots of dietary choices that are as natural as possible. Which means many kinds of unfertilized grasses… and weeds… and brambles… and trees. Their new home met both criteria. The pastures had not been fertilized for at least eight years and contained a broad variety of “stuff.” And with the water pond on one end and the best grazing on the far other end they would surely get plenty of movement. If they didn’t we also knew how to force it with a bit of their favorite hay. The concept here is that horses in the wild do a spectacular job of taking care of themselves come what may, and our guys and gals are genetically identical to horses in the wild. It’s difficult sometimes to turn loose, to, as Rick Lamb says, “set ’em up for success then get the heck outta the way.” But that’s exactly what we did. Almost all of the time. Well, most of the time. Okay, almost most of the time :)

The year went from the wettest fall to the worst winter in 25 years. The floodingest Spring ever. And the hottest summer in decades. But with all of that, there were the good moments. The happy moments. The times when we actually stopped and soaked up the beautiful setting we had landed in. And we enjoyed. 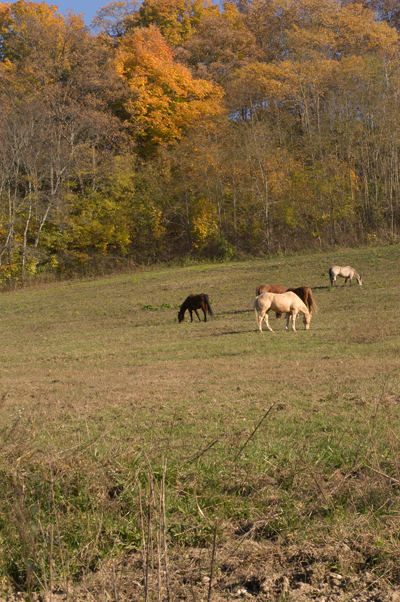 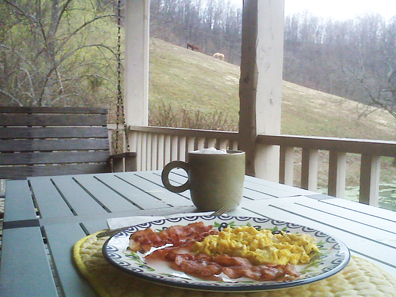 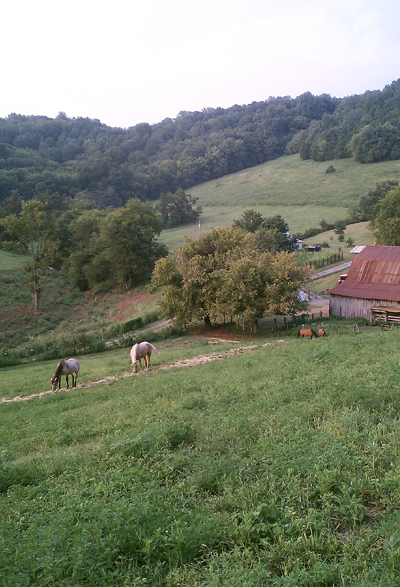 I think the horses agreed. On the morning after they arrived we opened the paddock gate and let everyone except our mustang Noelle into the pasture for the first time. And they hit the gate running! It’s been a while since I’ve seen such sheer joy. They ran and kicked and frolicked all the way to the far end of the smaller pasture and all the way back, then back again. They were free. I suspect in more space than any of them had ever been in before. Kathleen said “If this doesn’t tell you how they’re supposed to live I don’t know what will.” She was manning the video camera so we don’t have stills of these moments but they were surely beautiful. Our herd was happy. 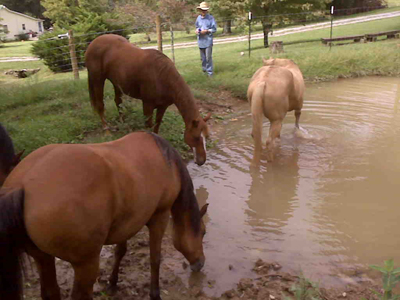 Wow! What a big water tub this is! 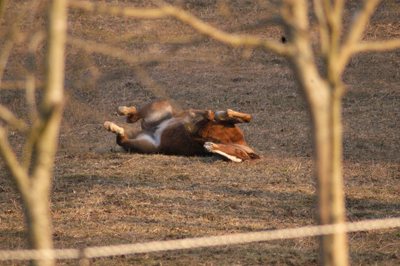 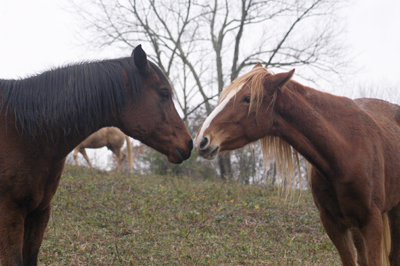 It soon became obvious, with the weather we were having, that the round pen was not going to get put up until spring and there would be very little progress with Noelle over the winter. So the day finally came when we felt it was time to let her join the herd. 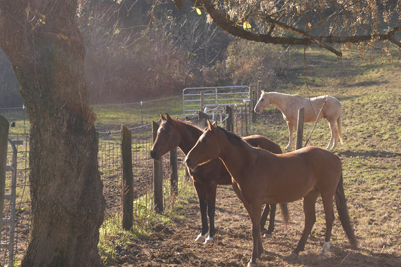 The morning came and the herd could sense something was afoot. They waited and watched. I had assumed that when I opened the gate Noelle would go right through it but she didn’t. She actually had to be coaxed into freedom. 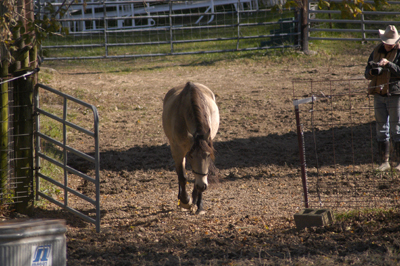 There were some pleasantries… 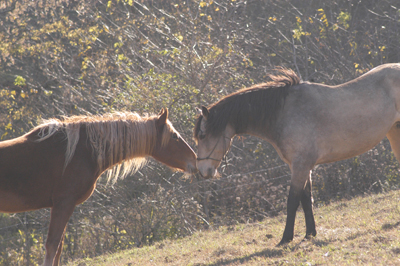 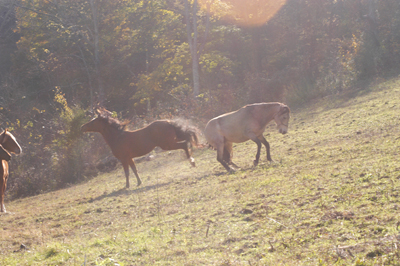 And in the end the herd had a new leader 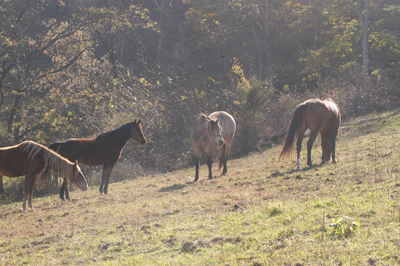 Since that day, they’ve all been quite sweet to each other. No altercations at all. My biggest fear was that Noelle would never come back in and our morning and evening feed-and-rub sessions would vanish. But that very night, at exactly the right time, she strolled right back to her tub in the front paddock. And whinnied. Hello! Where’s my dinner? 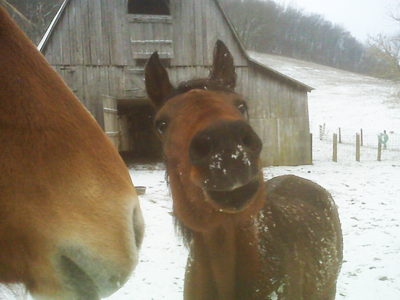 In early December Cash experienced his very first snowfall, the first of three over the winter, and probably the first ever for four of our six horses, three of our four dogs, and our kitty. Okay, okay, I know all you guys who live way on up there in the freezer are laughing your heads off at me calling this snow, but I was like a kid that morning (Kathleen was unfortunately in southern California and missing it all). It was exciting. Fun. And all the critters seemed to agree. 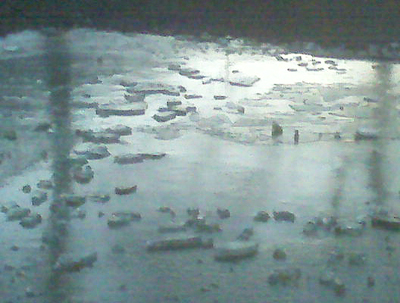 We had to learn the hard way to keep horses away from the pond during a 20-day span of temperatures below freezing. Mariah skated out to the middle of the pond and fell through the ice. Fortunately it’s only five feet deep and she managed thrash her way out. A house full of blankets and all the favored hay she could eat brought her through it none the worse for wear except for a slight scratch on her left rear. Closing down the pond pasture meant water tubs in the barn, which meant heating elements in the tubs, which worked well until the “non-freeze” spigot in the barn froze and I had to haul water from the house to the barn in the Gator. Even this was manageable until the Gator broke. Which netted many long walks carrying two big jugs full of water. 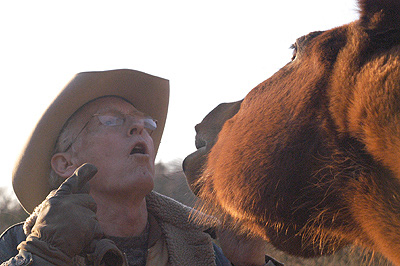 Finally in late February we had our first four consecutive days of sunshine since the day we moved in. We were all happy campers. And spring began to push back all chilling memories of winter. 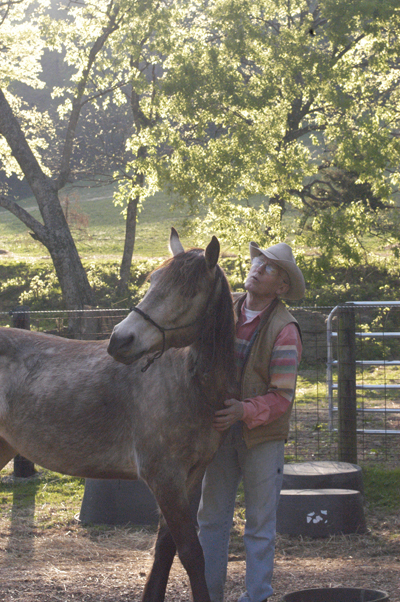 And, after searching for months,  I even found Noelle’s sweet spot. 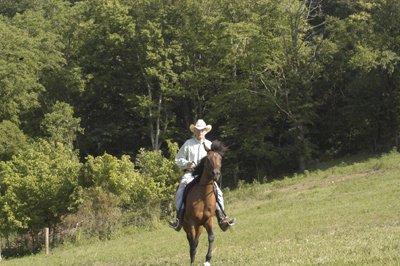 This summer, I rode Cash for the first time time since fall. B&B. Barefoot and bitless :) 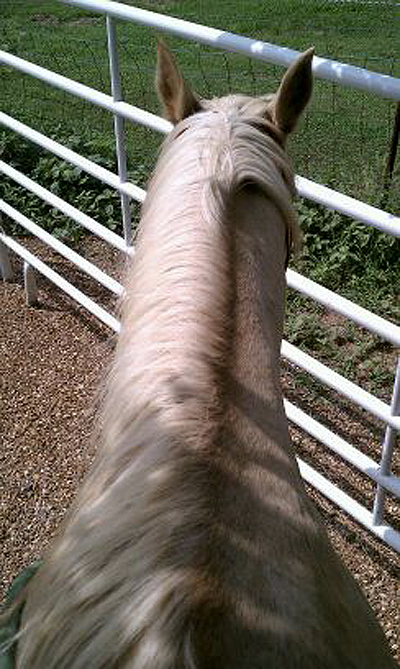 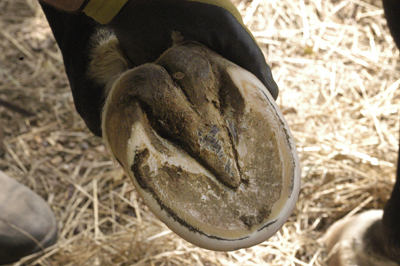 One week ago – Cash’s front left after Mark Taylor’s trim.

Mark proclaimed all feet in “great shape”… especially considering the weather and changes they’ve been through. Our vet, Dr. Bobby, came out and gave all of the herd except Noelle a thorough checkup and everyone passed with flying colors. So here we are with six happy healthy horses, very well adjusted and loving their natural life… as we continue to receive our life lessons from the herd. And are replenished daily, hourly, by scenes like the ones above and below. That same evening Kathleen and I sat on the porch with a glass of wine watching the herd, and talking. “I know in my heart that the philosophy is correct,” she said. “That our horses are living the life they should be living, and because of that they should be able to take care of themselves.” She paused for a moment, then added, “But it surely feels good to see this first year come to an end and be able to see the hard cold proof of it all.” I smiled, teared up a bit, and said simply, “Thank you God.” 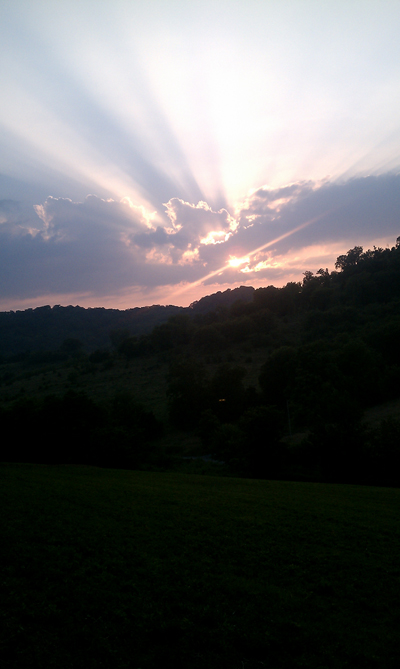 From our front porch