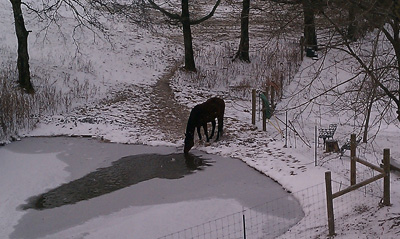 This is such a good idea and has worked so beautifully for us since our move to middle Tennessee in 2009 I try to post a reminder every fall.

December of 2010, the year after we arrived in middle Tennessee, was the coldest in recorded history since the early 1940s. We had just limped through eight days of below freezing temperatures. It got so low the first night that the pond totally froze. I kept trying to break up the ice along the edges so the horses could get to water (the remnants seen on the gravel in the photo below) but it soon reached the point where it was re-freezing before I could get back into the house. So finally – remembering well Mariah’s fall through the ice the winter before when I had to close off the entire pasture and started filling water tubs down at the barn.

So off to Lowes I went and came home with a $70 submersible pond pump. The kind you might use to make or drive a fountain or a waterfall. I placed it on a concrete block about eight feet from the edge of the pond with the output pointing straight up, covered the power cord with rocks (the ground was already too frozen to dig a trench), ran an extension cord down from the house… and voila, the photo you see below. 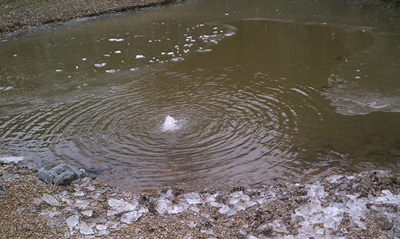 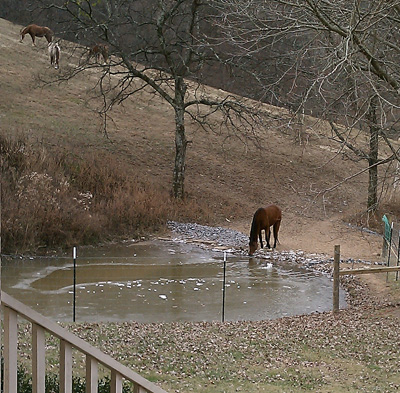 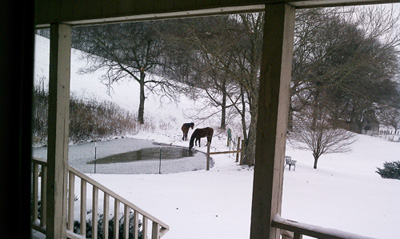 Conclusions: The winter of 2010 continued to set record temperatures and snow accumulations and the winter of 2013-14 was even worse with nights of below zero temperatures. But that great little pump persisted and never once did the horses not have their little pool to drink from. When it got cold enough long enough to cause serious edge freezing I moved the pump closer to the shoreline and that was all it took. I also planned to dig the bottom deeper along the shoreline because one of the reasons it was freezing is that it’s only inches deep right at the edge so the water movement has less effect. If worse had come to worse I might’ve even acquired a second pump. This seems to be a solution that will work for anyone, at least anyone in the mid-latitudes of the U.S. In either a pond or tub. I have no idea what would happen waaay up at the top of the country, or in Canada. Perhaps a bigger, more powerful pump might be needed. If anyone up there tries it I’d love to hear about the results.

Suffice to say the pump is back in the pond and ready for whatever the winter of 2014-15 might bring. One additional piece of advice: don’t leave that little devil in the pond if you turn it off in the Spring. I did that the first year year. I had to virtually take it apart to get it clean and operating again in the fall. Things do grow during the Spring and Summer in Tennessee :)