A Round Pen with Pea Gravel!

Finally. Enough days of dry weather sandwiched together to get the grading done and get the pea gravel delivered and voila! We have a round pen. Kathleen returns for the summer (another yippee) in a couple of weeks – with her cameras – and then work with Noelle will begin in earnest. No more excuses. A Join-Up and a lead rope are in her future :). Meanwhile she will spend time going through the round pen to the front paddock where she is fed morning and night, just getting used to that evil horse-eating pen. It went up yesterday and this morning she cautiously strolled down the hill and into the pen through two open panels, sniffed around for quite some time, then walked toward the gate into the paddock, stopping cold a few feet away. The huffing and puffing began. This is one scary gate, only six feet wide, surely designed especially to eat mustangs. But there was her feed tub, not far away on the other side of the gate. She thought and huffed and thought and puffed… and finally bolted through the gate at a dead run. Whew! It was good to know that mustang mares are faster than round pen gates. But, after mealtime, without that good Safe Starch forage as an incentive, it was a no go. She got really close to the gate at one point and some part of it scared her so bad she did a perfect rollback, front feet all the way off the ground for the full 180, before racing off across the paddock. I think it might’ve been the metal cross piece on the ground at the bottom of the gate, but I was up in the pasture scattering hay by then and couldn’t tell for sure. She ultimately discovered that the back end of the barn breezeway was open to the pasture so off she went. My guess is if that escape route is closed to her and there just happens to be a bit of hay in the round pen, it won’t be long at all before this will be behind her.

It’ll also be fun to get Cash and Mouse into the pen with the big circus ball. And Kathleen is looking forward to picking up her work with her big ol palomino sofa Skeeter. 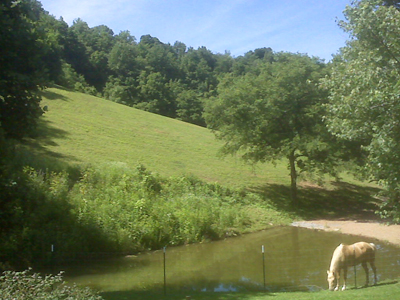 This is one of those near-perfect days that allowed things to dry out enough to get the work done for the round pen. The skies were clear, the pastures had just been mowed, and everything was just gorgeous. I’m sure someone is going to screech Did you say pea gravel in the round pen?! Are you nuts? The answer to both, of course, is yes. But pea gravel is, in fact, terrific for bare hooves. Especially in this ground soaked climate. It does a bit of rasping and stimulates the soles and the frogs, promoting good blood circulation. We put a base down of crushed limestone (called crusher run) so the pea gravel wouldn’t sink into oblivion.

Some of the boys and girls are having plant allergy issues and the cumulative opinion seems to be that it’ll take a couple of years for their immune systems to become adjusted to all the flora they’ve never encountered before. But their feet have come through the wettest fall, worst winter, and most flooded spring ever in excellent shape. All except Noelle’s. But we made the decision way back that we wouldn’t let her hooves get in the way of allowing relationship to evolve slowly, pretty much at her pace. I haven’t known many mustangs but she is definitely the freakiest. The incident at the round pen gate this morning speaks volumes. I think her feet, however, have grown tired of waiting for her brain. 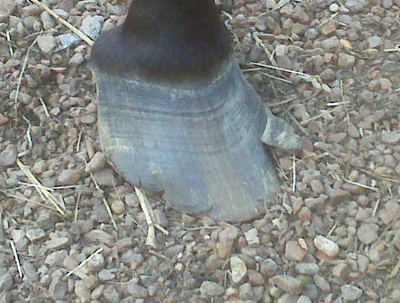 Believe it or not, when I saw this flap I wasn’t terribly worried. On that same morning Kathleen found this clump of mud that that had dropped out of one of her front feet beautifully in tact. 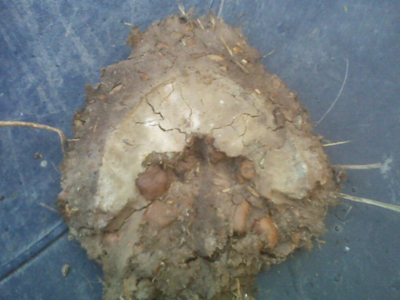 Note how the live sole area is almost perfectly defined in white (exfoliating powdery sole material I presume) as is the ridge between the live sole and the lamellar wedge that Pete Ramey talks about so often in his DVD set. Everything forward of that ridge is lamellar wedge (no vascular system… pretty much worthless material – stuff that the natural hoof specialist or the horse itself will ultimately do away with). As part of studies of the Australian wild Brumby by the University of Queensland, they captured a mare in a herd located in a climate similar to ours here in middle Tennessee and introduced her to a stallion in a herd in the desert. When she was released to the herd in the desert her feet looked pretty much like Noelle’s. When she was recaptured three months later (she wore a GPS collar) her feet were perfect. Beautiful. In just three months! Which comes from traversing the kind of terrain her genetics evolved in for millions of years. 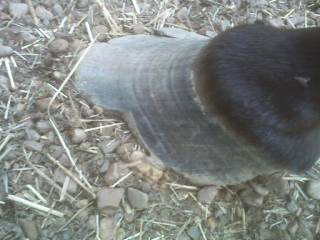 The next day that flap on her right front broke off, very cleanly. I wished I could put a mustang roll on it. 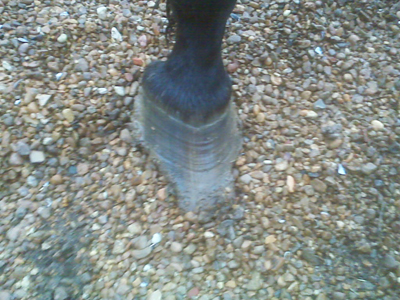 A couple of days later the other side broke off. Sorry for the soft focus. It was cloudy dark this morning when I shot this with my phone. I’m watching the situation closely and if anything scary happens we’ll do what needs to be done. But I think she’s just trying to make Mark Taylor’s job easier when we finally get to trim. 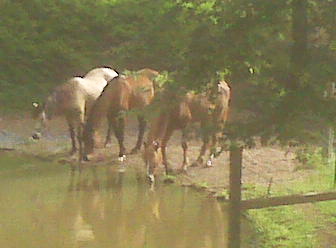 Noelle, Cash, and Mouse
Mustang, Arabian, American Saddlebred
Ages 6, 14, 3
Girl, boy, girl
Not too bad for an ol’ middle-aged guy. Right between the wild and the young.