Dr. Wallach’s relentless 45-year pursuit of scientific truth and his persistent willingness to challenge the status quo has enriched the lives and improved the health and well-being of millions of animals, then millions of people.  First as a scientist and a vet, then as a physician. His research has been published 75 times in peer-reviewed medical and scientific journals internationally. He has written or co-written thirteen books, one of which is in the Smithsonian Institute (Diseases of Exotic Animals). He has removed more than 900 diseases from the animal world and gone back to school at 40 to become a naturopathic physician so he could prove that the same research that works for animals also works for humans. And prove it he did.

Kathleen and I are distributors for Youngevity products because we respect Dr. Wallach and the research he has done so much. And because I know from personal experience that these products deliver everything promised. I’m 78. I had two painfully arthritic knees, one of them bone-on-bone and begging for surgery; and I have rotator cuff tears in both shoulders. We began the program in April of 2015 and after four months I was pain free in both knees and both shoulders. I went off all cholesterol meds. No more statins. Yay! And I feel better, healthier than I have in years. I have more energy. Much more positive attitude. I sleep better. I sing to the horses (who are hopefully tone deaf). All ten of us are on the program! Seven horses, Kathleen and moi. Is that all-in or what? :)

Dr. Wallach says he loves folks with arthritis because it’s so easy to fix. But Youngevity also regularly takes people off Type 2 Diabetes medication, blood pressure medication, reflux and digestive meds, and all sorts of other once-considered chronic or genetic illnesses. And the foundation for it all are these 70+ minerals in nature’s balance from Youngevity’s own humic shale mine in Utah. Thanks so much for this doc. You will soon be loving the stories from the horse world as well. As Doc Wallach says, “Give the body what it is genetically designed to have and it can do amazing things.” Whether you’re a human or a horse :).

And yet, for the most part, the medical and pharmaceutical world has ignored him. He could not convince them to practice nutritional prevention. Mostly because the medical world is built on the back of synthetic prescription pharmaceuticals. If it’s found in nature it cannot be patented. And if it’s not patented you cannot charge a lot of money for it. Dr. Wallach even had to file a lawsuit against the FDA because they would not give credit to the numerous clinical research studies proving that the mineral selenium prevents certain kinds of cancer. He won that suit and two appeals and the FDA finally was forced to relent and approve the statements. The first ever given to a supplement.

But Dr. Wallach said, “Enough!” We will build an army of passionate crusaders and pay them a ridiculous amount of money to share the 90 For Life message with the most advanced nutritional products available anywhere at any price.”

But if all you want out of this program is a happier much healthier life. No problem. No selling. No sharing.

I was very skeptical at first. All my life I’ve heard nothing but bad things about anything even closely resembling a multi-level marketing program, and had it not been for our family doc, an MD internist, recommending it so strongly we might not have jumped in. But I’ve come to discover that for the most part it’s not the marketing programs that deserve the bad rap. It’s the products being sold. The compensation model is usually good (this one is unbelievable) IF the product is a truly good product, something that honestly changes your life. And this one does. And that’s when skepticism turns into passion. As the Chairman of our upline said, “With Youngevity it’s not about the commission, it’s about the mission. It’s about knowing, in your heart, that everyday you have the opportunity to change someone’s life for the better.”

I know how that feels. For ten years we’ve been doing that for horses, and now we’re also doing it for their human partners. It’s an incredible, very blessed feeling actually, and I highly recommend it.

Dr. Wallach’s mission and passion are to prove to the medical community (and the world) that there’s a different and better way to look at health care that is not built on a model of just waiting around for something bad to happen then trying to fix it.

Take Charge of Your Health
Discover How Awesome It Can Be
joecampinfo.com

Then Fill In this Online Health Self Evaluation
and See How Easily You Can Get There
joecamphealtheval.com

It takes less than 5 minutes and when you click submit, it will email you and me a copy and a recommended program that we can discuss. We’ll figure out a time and I’ll call you.

Two-time Nobel Prize winning scientist Linus Pauling said, “Every ailment, every disease, every illness can be traced to a mineral deficiency.” Dr. Joel Wallach was listening, and there’s no better person on the planet to talk about his 45  years of clinical research which resulted in the amazing Youngevity program than the good doctor himself. 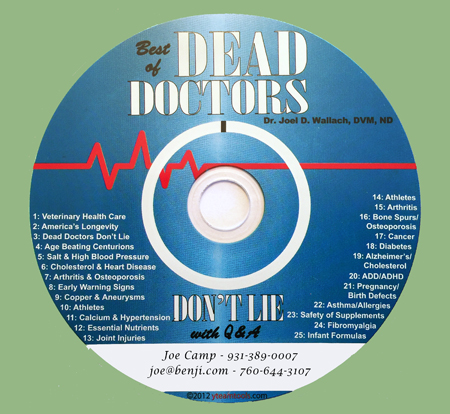 More than two hundred million copies of this CD have been sold!

I know, I know. When I get excited about something I can’t ever slow down, much less shut up. Kathleen calls it information overload :). So I’m going to try to stick to the basics with links to the details if you want more.First, what is humic shale? Where does it come from and why is it better than any other source for minerals on the planet? It’s a fascinating story. Click here to read about Youngevity’s Humic Shale Mine in Utah.

Next, why are these minerals so important to us and every living mammal? And why did Dr. Joel Wallach spend over 40 years, first as a clinical research veterinarian, then as a naturopathic physician discovering the facts about how our bodies are genetically designed to have access to these minerals. Click here for Why Minerals.