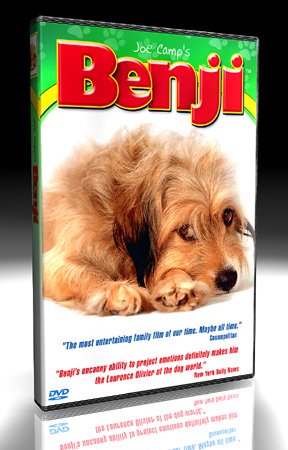 “The most entertaining family film of our time. Maybe of all time.” – Liz Smith – Cosmopolitan

The original Benji movie; the first ever with a dog as the primary three-dimensional character, actually acting, expressing emotion on the screen. Oprah’s and Steven Spielberg’s favorite four-legged movie star.

This original all-time family classic has been fully restored in glorious High Definition Widescreen for the first time ever! One of the most popular family movies of all time comes to Blu-ray, DVD, and Streaming with a stunning all-new HD restoration, presented in its original widescreen aspect ratio and fully loaded with special bonus features! Read More!

Free with every sale of the Standard definition DVD here on the website: 8×10 Photo with Benji’s own “paw-o-graph!”

“Benji is able to sulk, skulk, peek, pause, do double-takes, worry, frown, scowl and glint in sly triumph. He is so wordlessly articulate that he should do a film without any two-footed creatures at all trying to steal scenes from that small and extraordinary dog with the soulful eyes.” – Los Angeles Times

“There is no Oscar for animal actors but perhaps there should be.” The Dallas Morning News

“I’m ready to admit Benji would be a sure bet were an Academy Award ever offered in the canine division. His ability to sustain a mood in the face of manifold distractions is especially remarkable.” – Baltimore Sun

“Benji has the most expressive face in dogdom” – Milwaukee Journal

“The most appealing short movie star since Dustin Hoffman.” – CBS-TV