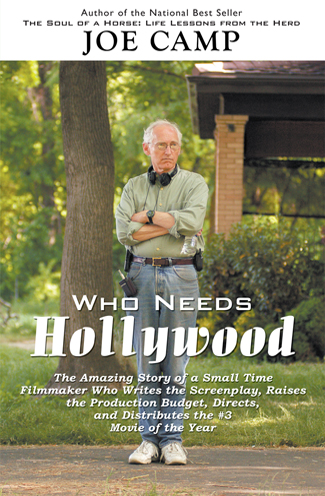 This is a story of slammed doors, rejection, ridicule, and ultimately the tenacity that produced for Joe Camp the #3 movie of the year, without any help from Hollywood. An inspiring insight into how to make things happen, against all odds, and confirmation that every dream is, in fact, possible.

Author of the National Best Seller The Soul of a Horse: Life Lessons from the Herd, Camp was told by industry “experts” not to bother with his first film; that it wouldn’t work. He proved the experts wrong. Film buffs, aspiring writers, and directors will find Camp’s story inspiring. After an award-winning career in movies and television, Joe Camp at it again with a new career as an author. His best seller The Soul of a Horse is in its ninth printing and is changing the lives of horses and people all across the planet for the better. Camp has written, produced and directed seven theatrical motion pictures cumulatively grossing well over the equivalent of $600 million in today’s dollars, making him one of the most successful independent filmmakers of all time.

A wise elder once said, “You can’t tell a book by its cover.”

He or she must have been referring to Who Needs Hollywood.

If you want or expect a namedropping foray through Tinsel Town, or a nice cute tale about dogs by the guy in 1974 who forged the first Benji movie almost with his bare hands, you won’t be too disappointed as author Joe Camp does throw in a few names and battles with stereotypical Hollywood forms and other more conventional devices.

But the Hollywood glamour days are almost secondary, the theatrical drama virtually anti-climactic. In a strange, strong, compelling sense, the book is not about the making of a Hollywood movie. It is about faith….having faith in what you can do, in hanging on.

It also is a love story, for Joe’s first wife Carolyn, a college sweetheart who died too young but believed in him and for his present wife Kathleen. It is about strength and memories and family and remembering what his dad taught him about talent and perseverance long before he approached movie making. It is about the importance of little things like trust, observation, caring, really observing, questioning, mentoring, and doing something one believes in with someone one cares about, not just making money for the sake of the coins collected. It is not a pompous, presumptive, egocentric piece about success on the surface but more about feeling and finding and forming. Camp’s previous best seller, The Soul of a Horse used a similar approach: horse training as a way to explore the real human soul.  Camp occasionally gives us some clues about himself and his motivation for life, not just a springboard for screenplays and books. He writes, for example, “Given a choice, I simply prefer to believe, rather than doubt, what people tell me. I prefer faith to suspicion. So, I tend to thwart what little intuition I might have with an assumption that people are largely caring, honest, intelligent and understanding.”

Sometimes, we literally have trouble seeing things from others’ points of view. It was hard to convince potential backers that Benji could act, that he was the star. A Dallas newspaper reviewer never mentioned the pooch when on the set to do a story; “big people” had to be the star.” Camp, however, finally sold the idea that emotions and feelings can be transmitted and revealed via a small canine.

The conscientious reader wanting much more than the typical Hollywood celebrity story need not despair or search any longer. He or she will find it in what Camp has written.

A NOTE FROM KATHLEEN

Hi everybody. This is Kathleen. I sent Joe to the barn so I could write this piece of truth. His next book has just come out and no it’s not the follow up to The Soul of a Horse. Joe had this book and two others almost finished when he pushed them aside to write “Soul”. This one’s not even about horses… unless you’ve ever wondered what kind of person could begin writing a book like The Soul of a Horse less than a year-and-a-half after acquiring his very first one. This new book will answer that question (in spades!). So, in truth, it is about horses because this journey is the one that created the man who has meant so much to you and your horses. It’s called: Who Needs Hollywood… (with the longest subtitle in bookdom :)

You will love it. I promise.

It’s available (or can be ordered) wherever books are sold, but if you plan to buy it online, please use Amazon. I cannot tell you how much it helps to focus purchases on the largest seller of books in the world.

See All the Books of Joe Camp

PRAISE FOR THE WORKS OF JOE CAMP

“One cannot help but be touched by Camp’s love for animals and his eloquence on the subject.” – Michael Korda, The Washington Post

“Who Needs Hollywood is FANTASTIC…I LOVE IT!! I literally couldn’t put it down yesterday. It’s such fun.” – Marjorie Samuels, reader

“To say too much about Camp’s compelling book would be to spoil much of the beauty and simplicity of the story. The tightly-written, simply-designed and powerfully drawn chapters often read like short stories that flow from the heart.” – Jack L. Kennedy, The Joplin Independent

“I wish you could hear my excitement for Joe Camp’s new book. It is unique, powerful, needed.” – Marty Becker, Best-selling author of several “Chicken Soup for the Soul” books

“This book encourages people to fight for their dream. Work for their dream. Who Needs Hollywood is so much more than a story about a dog or about making a movie. Like Camp’s best seller, The Soul of a Horse, this one is full of insight and inspiration. And how to make things happen against all odds. Who Needs Hollywood is written with candor, and at times a self-effacing humility and is a refreshing break from some celebrity books that are all about me.” –Maryann Miller – Blogger News Network

“I just finished Who Needs Hollywood and honestly couldn’t put it down until it was finished. The incredible tenacity and determination of Joe Camp is inspiring to all creative people in literature, art, music, and film. Thank you for your encouragement and insight!” –Conrad Noddin – Nashville Newzine

“This is a book about dreams. It’s a book about running with those dreams even though the “powers that be” are throwing up roadblocks at every turn in the journey. Joe Camp is a dreamer, but he’s also a doer. He’s a man that knew where he wanted to go, and he made his plans accordingly. Joe wanted to make movies, and he would not be deterred. It’s a story about keeping your eye on the prize and eliminating the word “no” from your vocabulary. “Who Needs Hollywood” is not just a book. It’s a life lesson that we all need to study and practice in our own lives…there will be a test.” –Vaughn Wilson, Author of Tell Me About That Horse