No Horse is Physically (Skeletally) Mature Before 5.5 to 6 Years Old 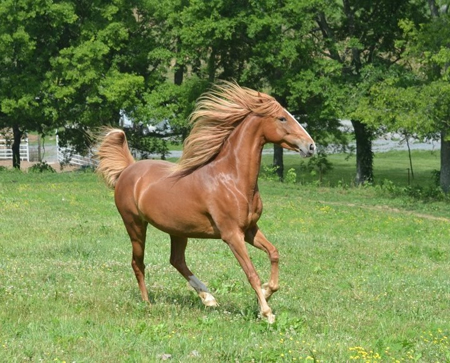 Our Mouse, coming up on physical maturity.
Almost ready to start at 7 years old.

Below is the link to the best article I’ve ever read on this subject. It teaches that no horse, of any breed, in any country, at any time in history either now or in the past, has ever been physically (skeletally) mature before it is six years old (plus or minus a few months), including every healthy, domestically-raised male and most female horses on the planet. Gaited horses (Tennessee Walkers, American Saddlebreds, etc) can require up to 8 years to fully mature skeletally. Our Mouse (above) is a rescued Saddlebred.

The Link to the article:
http://www.equinestudies.org/ranger_2008/ranger_piece_2008_pdf1.pdf

This article is written by Dr. Deb Bennett Ph.D. Dr. Bennett is a 1984 graduate of the University of Kansas, and until 1992 was with the Smithsonian Institution. She is considered by many to be an authority on the classification, evolution, anatomy, and biomechanics of fossil and living horses.

Below are a few key quotes from the article (but I encourage you to take the time to read the entire paper).

“Believe it or not many vets are totally unaware, as many members of the general public are also unaware, that horses have more than one “growth plate”, that there are multiple ossification centers pertaining to every bone of the body outside of the skull, and that the schedule of growth-plate closure (which begins around the time of birth and extends until the sixth year, and is coordinated with the eruption schedule of the teeth) has been well known to veterinarians, paleontologists, zooarchaeologists, and mammalogists since the early 19th century.”

“There is no such thing [as a] slow-maturing breed. The Quarter Horse is not an ‘early maturing’ breed – and neither is the Arabian a ‘slow maturing’ breed. As far as their skeletons go, they are the same. This information comes, I know, as a shock to many people who think starting their colt or filly under saddle at age two is what they ought to be doing. “

“While growth in cannon bone length stops with the fusion of both growth plates at around 1 ½ years of age, increase in cannon bone girth does not taper off until close to 5 years of age, and essentially the same can be said for the girth of any other limb element, with those bones located higher up in the body maturing later.”

It is the spine, not the limbs, that the horse primarily uses to govern overall coordination of the limbs

“Most of the growth plates above the distal radius in a three year old horse are unfused, including, most importantly, those of the animal’s spine. It is the spine of the horse that governs the overall coordination of the limbs and the animal’s running “style”. It is the spine, not the limbs, that the animal primarily uses to compensate for potholes, slick spots, and other irregularities in the race track [or any track]. The higher the speed and the greater the physical effort, the more important it is that the animal have all of its joints mature and in good working order. While catastrophic failures are uncommon, more subtle distal limb disease and chronic pain and dysfunction in two and three year old racehorses are commonly diagnosed and are major causes for the “wastage” of young Thoroughbreds.”

“The demand for all-out speed from any animal that is not skeletally mature is a recipe for disaster.”

“What people often don’t realize is that there is a “growth plate” on either end of every bone behind the skull, and in the case of some bones (like the pelvis or vertebrae, which have many “corners”) there are multiple growth plates.”

“The lateness of vertebral “closure” is most significant for two reasons. One: in no limb are there 32 growth plates! Two: the growth plates in the limbs are (more or less) oriented perpendicular to the stress of the load passing through them, while those of the vertebral chain are oriented parallel to weight placed upon the horse’s back. Bottom line: you can sprain a horse’s back (i.e. displace the vertebral physes – see Figs. 5 and 8) a lot more easily than you can displace those located in the limbs.”

“So do you then have to wait [to start your horse] until all these growth plates convert to bone? No. But the longer you wait, the safer you’ll be. Owners and trainers need to realize there’s an easy-to-remember general schedule of fusion – and then make their decision as to when to ride the horse based on that rather than on the external appearance of the horse. For there are some breeds of horse – the Quarter Horse is the premier among these – which have been bred in such a manner as to look mature long before they actually are mature. This puts these horses in jeopardy from people who are either ignorant of the closure schedule, or more interested in their own schedule (for futurities or other competition) than they are in the welfare of the animal.”

“Bottom line: if you are one of those who equates “starting” with “riding”, then I guess you better not start your horse until he’s four. That would be the old, traditional, worldwide view: introduce the horse to equipment (all kinds of equipment and situations, with the handler on the ground) when he’s two, add crawling on and off of him at three, saddle him to begin riding him and teaching him to guide at four, start teaching him maneuvers or the basics of whatever job he’s going to do – cavalletti or stops or racing or something beyond trailing cattle – at five, and he’s on the payroll at six. The old Spanish way of bitting reflected this also, because the horse’s teeth aren’t mature (the tushes haven’t fully come in, nor all of the permanent cheek teeth either) until he’s six. This is what I’d do if it were my own horse.”

The Link to the article:
http://www.equinestudies.org/ranger_2008/ranger_piece_2008_pdf1.pdf

Read About Our Mission

Save 10% by clicking this link

and using the coupon code JOECAMP10 at checkout

But first read the National Best Seller that started it all
now in it’s 17th printing: