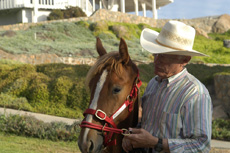 The creator of Benji brings decades of understanding animals to his affair with horses chronicled in his book The Soul of a Horse – Life Lessons from the Herd, “a must-read for those who love animals of any species.”

Joe Camp, film writer, producer, director, author, passionate speaker, and the man behind the canine superstar Benji believes that anything is possible if you work hard enough and have faith in yourself. He was told by industry “experts” not to bother with the original Benji film; that it wouldn’t work. He proved the experts wrong and now, after five Benji movies, he’s at it again with his new best selling book The Soul of a Horse published by the Crown/Harmony imprint of Random House. The book, in its ninth printing, is setting traditional thinking about horses on its ear and changing the lives of horses and people all across the planet.

Monty Roberts, author of the New York Times Bestseller The Man Who Listens to Horses , and world renowned clinician, said, “Imagine how inadequate it makes me feel to realize how recently Joe came into horses. The man is a natural when it comes to understanding how animals tick and a genius at telling us their story. The Soul of a Horse is a must read for those who love animals of any species.”

Camp has written, produced and directed seven theatrical motion pictures (including all of the Benji movies) cumulatively grossing well over the equivalent of $600 million in today’s dollars, making him one of the most successful independent filmmakers of all time.

Joe has also written three novels from his own screenplays, the inspirational non-fiction book Who Needs Hollywood, several children’s books, and to date eight books about horses, several of them best sellers.

Camp ignored industry “experts” who said the original Benji movie would never work. He raised the money from private sources to produce the film, but when completed the movie was turned down by every major film distributor in Hollywood. Camp and his partner Ed Vanston had to form their own distribution company and release the picture themselves worldwide from their offices in Dallas, with Camp personally developing the marketing strategy, writing advertising copy and press releases, and supervising each and every booking. In spite of the many obstacles, Variety reported the picture was the #3 grossing movie of the year.

In advance of release of the 2004 film Benji Off the Leash , Camp and his floppy-eared star traveled the nation for months, appearing on television, radio, in newspapers and magazines, promoting the film while passionately making a case for Hollywood to “clean up” their family films, and extolling the values of adopting pets from shelters. “This time around,” Camp says, “it’s all about proving that you can put food on the table and, at the same time, make a positive difference in peoples’ lives. It’s about living life with purpose, on purpose.”

When Camp struck out across the country in the Fall of 2001 to find the new Benji in an animal shelter, media flocked to follow him around. The American Humane Association had reported that the original Benji’s rescue from a shelter had caused more than one million adoptions. Camp wanted to recreate that model. Local and network television, radio and newspapers covered the search, with the ultimate selection being a feature on ABC’s Primetime Thursday . The search and Benji’s new movie generated more than one billion media exposures for the efforts of shelters and rescue groups all across the nation.

One of Joe’s favorite pastimes is working with the Piney Woods School in Mississippi. This historically black boarding school educates mostly high-risk kids from families below the poverty level, yet usually sends 100% of its graduates to college, many to some of the best colleges and universities in the country. “We are very proud of the things we’ve accomplished for these kids,” says Camp, “and the rewards are the greatest.”

Even with all the accomplishments and media exposure, Camp is still in awe of his own success. “Inside, I’m still a kid sitting in a dark theater in Little Rock, Arkansas, watching Disney’s ‘Song of the South’ or reading books like the Black Stallion with happy tears rolling down my cheeks,” he says.”To be able to bring that that kind of happiness to others is very special.”

Read about the Books of Joe Camp