Malachi – The Soul of a Horse Continues 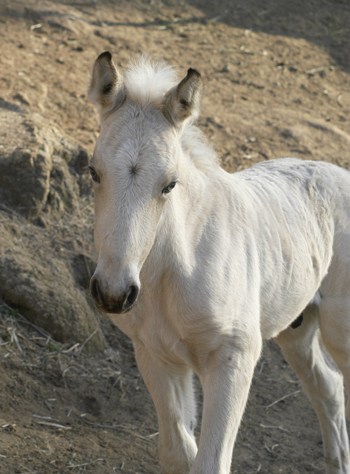 Malachi’s 8th day on the planet.

Malachi is the last book in the Old Testament of the Bible. In Hebrew the word means messenger, and in the Book of Malachi the message is that change is coming.

Malachi intended to write a book about change.

In fact I didn’t set out to write a book at all. Kathleen and I were just trying to figure out how to keep and care for a small group of horses that had somehow landed quite unexpectedly in our front yard. We were asking a lot of questions and getting a lot of answers that didn’t seem to make any sense. After stumbling through mistake after mistake, amassing an enormous amount of research, and spending a great deal of time with our little herd we discovered that either we were stark raving nuts or there was something very wrong in this world of horses. That’s where The Soul of a Horse began.

Thankfully for us it turned out that we weren’t nuts. At least not in the clinical sense.

We had little choice but to follow this journey. It was too late to turn back and in truth it held great fascination for me as a storyteller. I’ve spent most of my life telling stories, usually involving animals, and here we were: two complete neophytes who, a few short months before, didn’t have a horse… or a clue. Yet we were leaping face first into uncharted and very controversial waters on a collision course with the ultimate discovery that most “domestic” horses were being kept and cared for in a manner that is diametrically contradictory to their genetic design.

But even at that point, with that knowledge, I was not trying to create a book about change. It was a book about our mistakes, our astonishment at what we were finding, and how somewhere along the journey Kathleen and I both began to realize that what we were learning about relationships, leadership, persistence, and patience didn’t apply just to horses.

It seems that part came alive for some. Not a day goes by that we don’t hear from readers telling us how the book has changed their lives. People who love horses and people who have never laid hands on a horse. This is all very humbling for us.

The next book, the one you are reading the Preface for, is the continuation of our journey, the extension of our learning curve, and I suppose, once again, it will be called a book about change. Which is the reason we chose a very special name for our first-ever foal, the offspring of an unhandled pregnant mustang we adopted from the Bureau of Land Management. Considering the death sentence they were both living under – a sentence issued by our federal government – we feel the name is particularly appropriate.

So with all due apologies to my Cash, hero of the The Soul of a Horse and author of its Introduction, the next book will belong to a new life on the planet. His name is Malachi… for all the reasons above, and all the reasons to come.

The above photo and the two below were all taken yesterday, on Malachi’s seventh day of life. 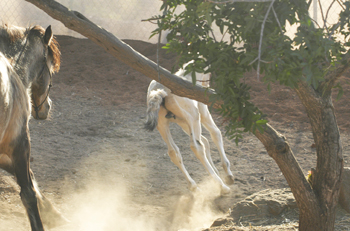 He’s already driving Noelle crazy with his racing and frolicking arond the paddock. 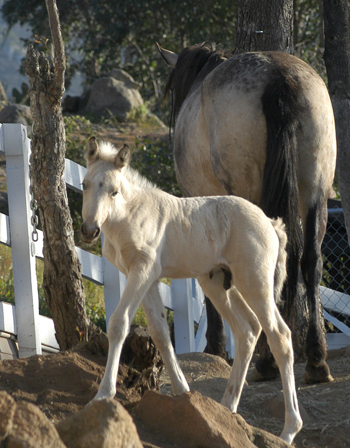 I’ve had one session a day with him (definitely a him :) since Day 3. Today he’s 10 days old, the second day he’s worn a halter. He turned tight circles in both directions, backed up a couple of steps, and learned to lead forward in a straight line. Only a few steps at a time, but he was figuring out that a step forward meant release of pressure. I lift and tap all four feet, rub him all over, including his ears, over and around his eyes, and in his nose. I put a finger in his mouth and rub his tongue. And we sit together on a hay bale. The first few days he would lie in my lap but he’s already getting too big for that. He’s a rambunctious little bugger and I cannot say that he’s in love with his exercises but he’s accepting them and trying hard to figure things out. Even while mama hollers next door. I suspect that he’d be doing even better had we been able to isolate him before the third day. It took us that long to figure out how to gain separation. Remember Noelle has never been on a rope and is a very protective mom. We had already built one stall in the paddock where we thought Noelle might want to deliver. She didn’t. We built a second adjacent stall and rigged a long line to the gate where I sit in a folding camping chair with my laptop waiting for Malachi to wander into the “play pen” without mama. Then I pull the “secret” line to shut the gate.

Kathleen’s having a grand time just watching and shooting video as Malachi romps and plays. She predicted that he’d be a boy, only because I had been calling him a her since we first decided to adopt. Another smack down from God :) And probably why I’m approaching all this a bit nervously. I’ve only been face-to-face with one stallion in my life. And I’ve never had a hand on a foal prior to Malachi. But I wake up every morning alive and anxious to get back to Mom and babe.