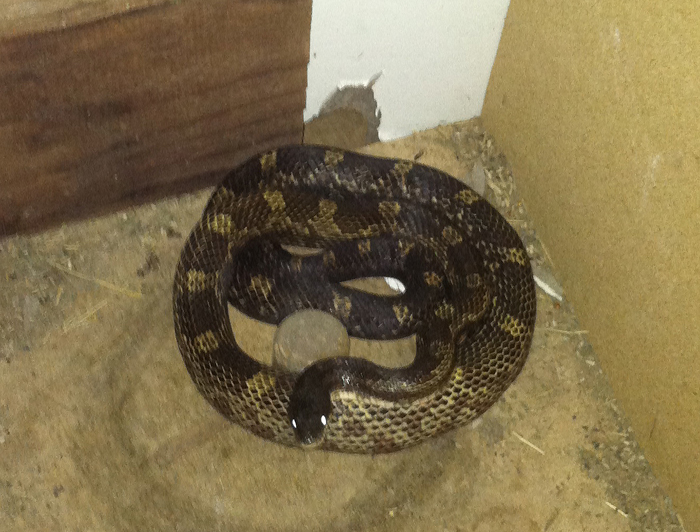 Last night while I was loading the Gator with hay to distribute in the pasture, totally spaced out, humming a tune to Zeke, the quiet of the moment was suddenly shattered by a blood curdling scream from the tack room. I raced in and Kathleen was in the corner totally trapped by and pointing to the cabinet where we keep our feeding buckets. “S-s-snake!!,” she squeaked out. I held the doors closed so she could escape from her corner… then slowly opened one door, maybe 5 inches, and peered inside. This photo is what she had seen, coiled in the corner, right where she had reached in to put feeding buckets on the bottom shelf. I slammed the door and held it tight, having no idea if it was poisonous or not. Just look at the head, every snake book says. If it’s triangular it is poisonous. If it’s rounded it isn’t. If the pupil in the eye is a slit, stay away. If it’s a circle, it’s okay.

Here snakey-poo. Be still now. Let me get close enough to see if you have slits for pupils.

So for the next thirty minutes we attempted to hold the door open just enough to stick the iPhone in and snap a photo so I could go compare it to snakes on the internet. And/or blow it up in Photoshop to to see if I could tell anything about the head shape. But the flash wouldn’t work. Three times. Quick, trade phones. Kathleen’s flash worked but I was shaking so much I couldn’t hold the dang thing still enough to get a decent photo. We must’ve taken and deleted 30 photos. I slowed down, quit breathing, concentrated, and finally got the photo that’s posted here. In the process I realized this snake had shown no aggressive tendency whatsoever. In fact, in this photo his head seems cocked a little, as if he was saying, “What the heck are y’all doing…over…and over…and over again.” I studied him (or her) for a long moment and started talking. “You seem like a good boy. Oh how I hope you are. Give me a big smile.”

This morning he was still there… obviously having had breakfast. There was a big ol lump right in the middle of his cylindrical body. I’m pretty sure he couldn’t get back through the hole he had used for entrance (right behind him in the photo). “Of course!” says I. “A mouse or a rat was the maker of that hole so they could have free access to where we kept the empty feed buckets.” His breakfast probably walked right into his mouth.

Meanwhile, last night, we discovered that he was a rat snake, most probably of the sub-species corn snake, which is the single most sought after snake in the U.S. for pets. Obviously non-venamous. So Kathleen named him Ratatouille and invited him to stay. We found another place for the bottom shelf buckets.

“Shall we call him Tooey?” I asked. “No,” says Kathleen. “Use his full name, with emphasis on the RAT. I want him to fully understand his job.”

We each talked to him extensively. I think we’ve actually “joined up” :).