It’s Not Over Until the Fat Lady Sings

Not that Noelle is fat mind you. But this morning, after months of silence, she was singing.

A full year ago, the first time Miss Saffron, our latest mustang adoption, entered our herd, at the time lead by Noelle, our first mustang adoption, there was a major brawl. Big time major (See the Blog and Video). And Saffron did not appear to get the best of it. Yet she kept coming back for more. 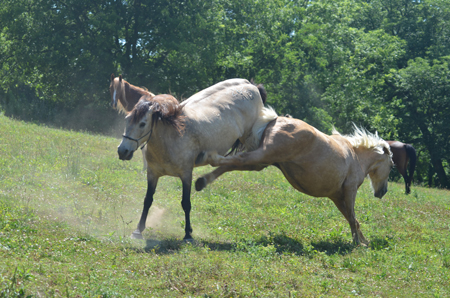 Her new baby, Firestorm, was barely two and a half months old at the time and we decided that perhaps it was too early for herd dynamics to play out appropriately, normally. That perhaps it was more about protecting her baby than being herd leader. So we separated Saffron and Stormy from the herd for another three months.

The next time out there were no hoofticuffs. Only a couple of stare-offs, and for the most part the two mustangs seemed to keep their distance. But as time passed whenever Saffron would approach Noelle, Noelle would move over, or withdraw. We were flabbergasted. Where did that come from? There was no way to make sense out of that development. Yet that’s how it’s been for more than eight months now.

Not so this morning.

No one was in sight when I arrived at the barn. I bellowed out the names of various herd members and went about the business of filling feed buckets. When I next checked most of them were heading over the hill toward the barn. Noelle was closest, standing just up the rise from the barn, but no amount of calling seemed to interest her. Several of the horses passed her by without comment and came on down. Then Saffy and Stormy appeared over the rise. I called to them and they ambled down toward the barn taking their own good time… until they passed Noelle. Saffy paused and looked back. 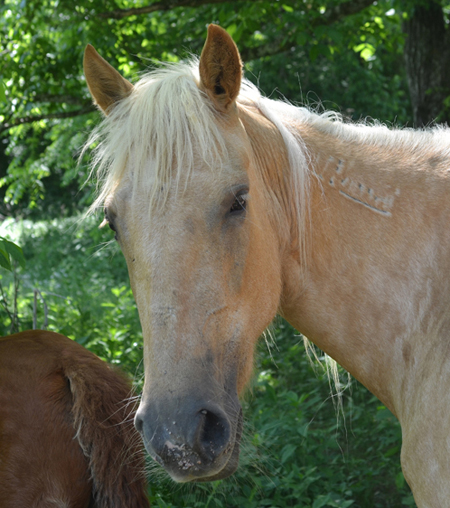 She and Noelle exchanged looks. I called Saffy and she glanced at me but wasn’t interested. She looked back at Noelle. Something was being said between them. Noelle just stood, ears up, looking quite majestic as she gazed without emotion at Saffy. 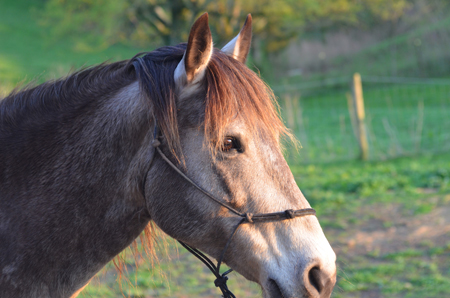 I sensed something brewing and continued to call Saffy. She glanced around a couple of times but didn’t budge. Finally she stepped toward Noelle, ears back, snaking out to nip. Noelle spun, Saffy spun, and they each threw a kick at the other. The contact was minimal. Then it was back to a staring match. Noelle was totally defensive, not aggressive in any way. But she didn’t move either. After a few moments of gazing at each other, Saffy turned away and strolled down the hill. Only then did Noelle start down to the round pen where she eats her breakfast.

I’ve always been fascinated by how the dominance structure is formed in a herd. It never seems to have anything to do with age, or size, or gender, or anything I can put my finger on. Trust and leadership are definitely involved, but based upon what? I don’t know. But I’d love to crawl up into one of their heads and see what’s going on when those decisions are being made. Certainly on this particular morning it appears that we are back, at the very least, to a period of detente. Equal footing. Shared dominance. Or is Noelle now back in control of her herd? If herd leadership has anything to do with who responds the quickest to the smallest possible threat, who has the most finely tuned automatic fear factor reaction, Noelle is your girl. Stay tuned.

But first read the National Best Seller that started it all
now in it’s 13th printing: