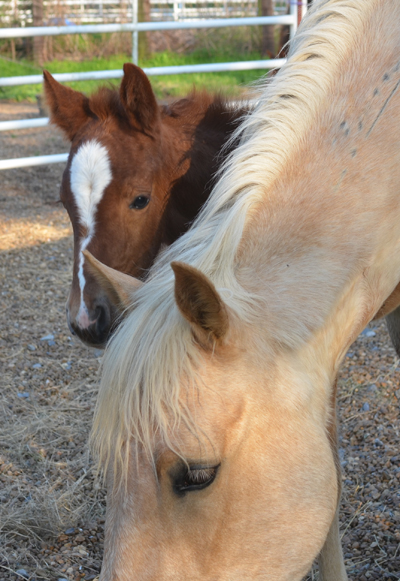 We’re only a week into this new journey and the most amazing things are happening. Barriers are crumbling like crazy. This past Saturday marked the end of Saffron’s first week with us. An un-handled pregnant mustang captured from the wild August 1st of last year. According to the BLM, she was supposed to deliver in May. But Stormy was born three days after Saffron stepped out of the trailer into her new home. We’ve been told that even mares who have grown up in domestic care can be so protective of their babies that they cannot be touched for days or weeks; and that to imprint a new foal the baby must be separated from the mom. Noelle, our first pregnant mustang adopted in December of 2008, was certainly that way. It took 19 days for her to eat from my hands. But Saffron ate from my hand the night she arrived. The video of her adoption, Here We Go Again, shot by Kathleen, who I’m happy to say is passionately back behind the camera (you’ll see below), captured some very special moments between us that proved to be intrinsic and prophetic. 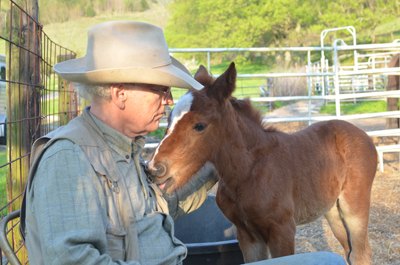 Stormy’s arrival came so much earlier than expected we were in no way prepared to safely separate mom from baby. Yet I was able to get my hands on the baby a mere hour after she was born, to rub and scratch on her, and begin Dr. Robert Miller’s imprinting process. With no complaints from mom who was munching Safe Starch a mere two feet away. Every day since, I’ve reached a little further and stretched the envelope, all with mom’s amazing show of trust and approval. The experience with Noelle did not prepare us for this lady :).

Then came the weekend. Kathleen and I began a ritual we had started with Noelle after Malachi died. We would go into Malachi’s playpen, open it up to Noelle, scatter a bit of hay around our feet, then sit there with a jelly glass of wine and talk with no agenda whatsoever. Seriously, none. It yielded some of the best moments we’ve ever had with Noelle. We began that with Saffron and Stormy on Saturday evening and, again, the yield was just amazing. Saffron walked right up to where we were sitting having no issues about getting one or two feet from us to munch the hay. And on various occasions, she reached up and sniffed both of my knees… and my gloves… and twice asked for a breath exchange (second photo above). YAY!! She has never been so forward. She touched me on the knees, hands, hat, and now face. I think she’ll be allowing me to touch her soon. This was so exciting. And Stormy was all over both of us. I rubbed and stuck my finger inside her ears, and picked up her feet, all without a blink. I keep saying it y’all. RELATIONSHIP FIRST continues to be the key. This no-agenda time has proven to be one of the very best things that’s happened for our relationship with Saffron. The only sad note was that Noelle was just outside the paddock watching, looking very pensive. 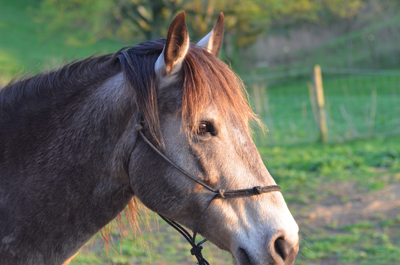 Maybe I was imagining but she so seemed to be saying That’s supposed to be me.

Sunday morning began with extraordinary progress. Miss Saffie had eaten repetitively from my hand, but only while I was sitting on a hay bale or in a chair. That was her comfort zone. Whenever I would stand she’d get nervous and pull away, but on this morning she actually walked up behind me as I was placing hay into her hay tub and asked for a bite. Very casually, with an over-the-top dollop of nonchalance, I held out a small bite and she took it without a blink. Then after I was seated in my feeding place on the hay bale she actually reached out and again traded breaths with me. 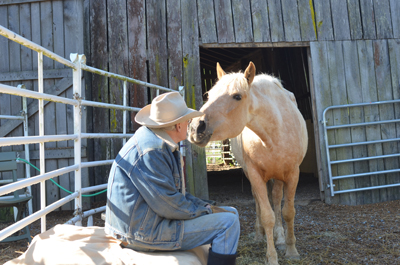 This was sooo cool!

With all that going on I felt it might be okay (with mom) for me to attempt to wrangle Stormy into my lap for the first time. This is such an important step, emphasized so much by Allen Pogue in his videos on Foal Training 1 & 2. When the foal relaxes in your lap, even naps, the bond takes giant steps forward.

Stormy came up for some licks and rubs and greetings, and I encircled her chest and butt and pulled her onto my lap! She struggled for a few moments and Saffron was watching and snorting a bit. I spoke softly to mom telling her it was ok and, after a bit, Stormy fully relaxed. I folded up her front legs into a fetal position, then one of her backs. Saffron went back to munching calmly.

With Stormy fully relaxed I slowly released my hold on her and she made no attempt to go away. I played with her ears, mouth, feet, tail, and then slowly unfolded her front feet and placed them back on the ground. Still she chose to stay. Finally I eased my body forward and placed her weight back on the ground. She shook and wandered off for a bit of breakfast. In just a moment she was back for more rubs. All with mama about 2 feet away. Here’s the photo sequence: 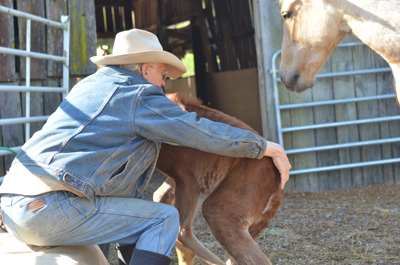 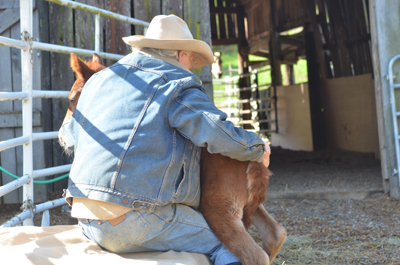 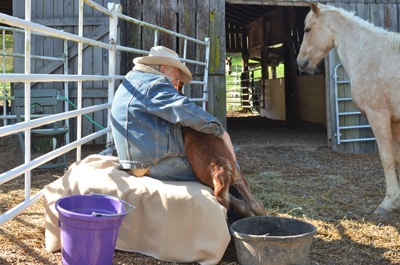 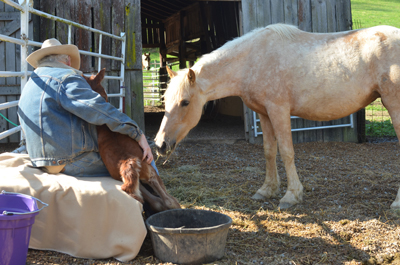 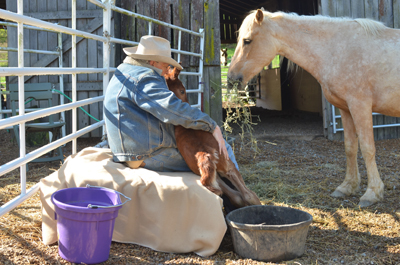 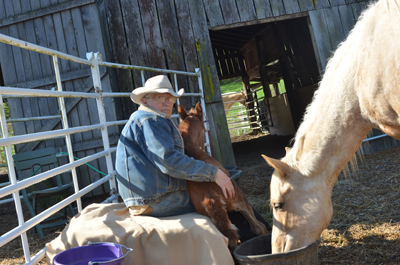 Sweetie, did you get all that? 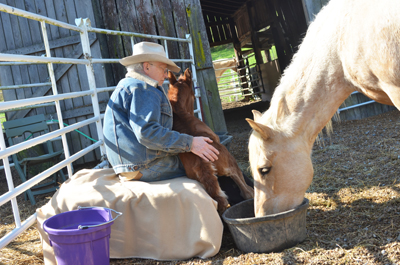 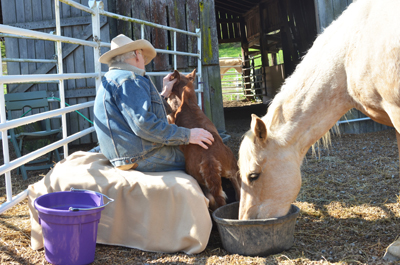 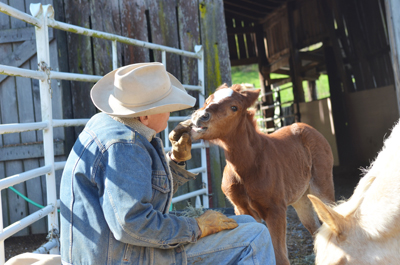 After a quick drink, she came right back 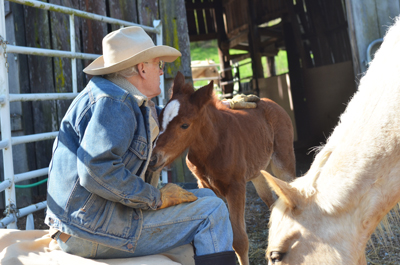 Every day since I’ve had her in my lap at least once, with no struggle whatsoever. Once she fell completely asleep.

All of this is just extraordinary. How God re-fired our interest, redirected us, and gave us these two incredible previously unhandled mustangs. Yesterday marked one week since Saffron arrived. Three days later she had a baby. And this weekend has been just amazing. Oh, and because of an email I received, I did the math to determine when Stormy was conceived and – can you believe this? – if her conception date was a perfect 11 months before her birth, she was conceived on April 20th… my birthday!

Again, it is just fantastic to have Kathleen’s juices flowing again behind the camera. Enjoy a few more of her weekend photos: 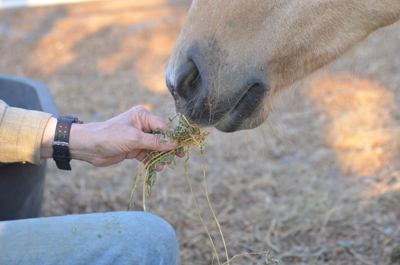 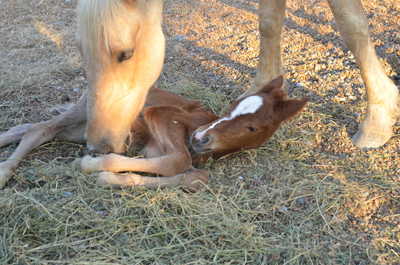 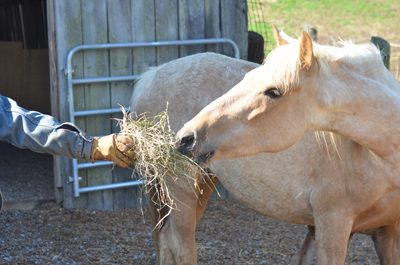 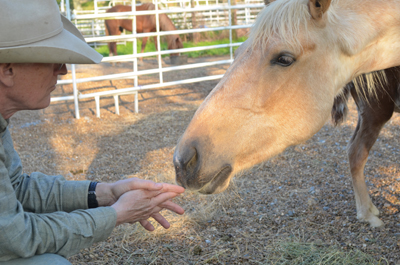 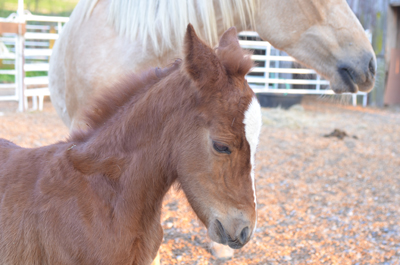 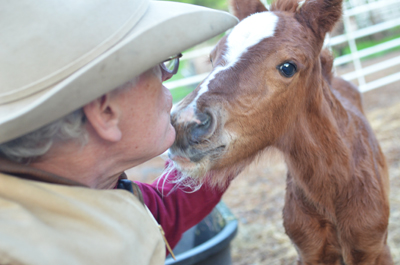 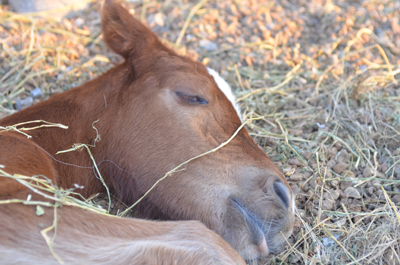 Below are the first six posts:

The Video – How it All Began

…and the highly acclaimed…

The Soul of a Horse Blogged
The Journey Continues